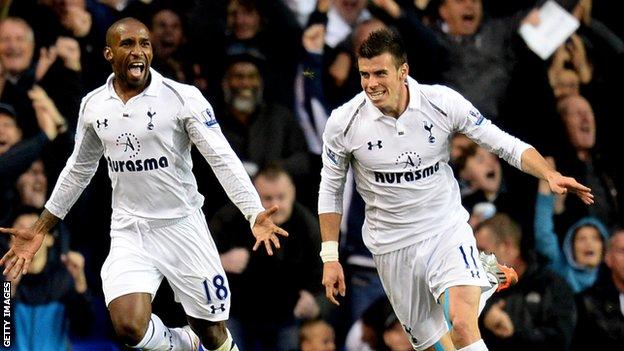 Tottenham scored twice in as many minutes as they fought back to beat Queens Park Rangers and record their first home win of the season.

Bobby Zamora gave QPR the lead against his old club during a first half in which Spurs were decidedly lacklustre.

But a formation change brought about an improvement in fortunes as an Alejandro Faurlin own goal levelled matters before Jermain Defoe struck the winner.

The win moves Spurs up to eighth in the Premier League while QPR remain 19th.

Jermain Defoe's second-half winner, his fourth goal of the season for Tottenham, was the 199th of his club career.

The home side had gone into the game looking for a second successive victory, having won 3-1 at Reading last time out.

QPR, meanwhile, were without a win in the league so far this season, and things did not start well for Mark Hughes's side as they were forced into making a third-minute change when Jose Bosingwa hobbled off with a hamstring injury.

He was replaced at right-back by Kieron Dyer and the former Newcastle midfielder's introduction had an almost immediate effect.

The 33-year-old earned QPR's first corner of the game, which Esteban Granero whipped into the box. Clint Hill launched himself at the ball, but his powerful header was superbly palmed away by Brad Friedel.

The visitors continued to enjoy the better of the opening stages and Spurs again had Friedel to thank for keeping the scores level when he saved Junior Hoilett's volleyed effort.

Tottenham struggled to make possession count in the final third, failing to manage a single shot on target during the opening exchanges, and it came as little surprise when QPR took the lead 12 minutes before the break.

A seventh corner of the half was only partially cleared before Faurlin received the ball just outside the area. He feigned to shoot before slipping the ball through the defence to Zamora, who turned quickly and lifted the ball over Friedel from close range.

Looking to instigate an upturn in form, Spurs boss Andre Villas-Boas replaced Gylfi Sigurdsson with Steven Caulker at the start of the second half and changed to a 4-4-2 formation, with Clint Dempsey partnering Defoe in attack.

The switch worked and Spurs finally managed their first shot on target as Dempsey's 30-yard effort was pushed away by Julio Cesar.

Gareth Bale was also becoming increasingly effective and he was instrumental in turning the game on its head as Tottenham scored two goals in quick succession.

The first arrived on the hour as Bale's corner was headed back towards goal by Caulker and Faurlin, unsighted by Defoe, compounded to knock the ball into his own net.

Barely 90 seconds later, Tottenham were ahead as a QPR attack broke down and the hosts embarked on a quick counter. The impressive Jan Vertonghen fed a pass to Bale on the left of the area and though his shot cannoned back off the underside of the bar, the ball fell to the unmarked Defoe, who made no mistake.

Suddenly the game was wide open and Hoilett was denied a 72nd-minute equaliser when he was unmarked inside the area but Vertonghen slid in from nowhere to clear.

But as QPR tired Spurs took control and Hill twice denied Defoe to prevent the margin of victory from being greater.

"I am extremely happy. The team fought very hard to get this win and the feeling we have at the moment is very gratifying. We have been looking for this for some time and the players put on the performance in the second half to help us get this win.

"They found spaces in our defence in the first half and all credit to them. We couldn't close them down but in the second half the players were really committed to showing more for the ball and we got the 2-1 we deserved.

"We felt we needed to make changes at half time. Gareth Bale played better as a left winger than as a left back and he made a difference for us. The players really, really wanted to win this game for the fans and it was more their will that took us through in the second half."

"We are scratching our heads somewhat to understand why we didn't get anything out of the game because the manner of our performance, particularly in the first half was very good.

"We came here and took the game to Tottenham, dominated the first 45 minutes and we were 1-0 to the good. In the second half they had to rejig to get back into the game, we gave them a helping hand with the own goal and then they got the second.

"But overall in terms of level of performance it was at the level I feel we need to be in the Premier League."