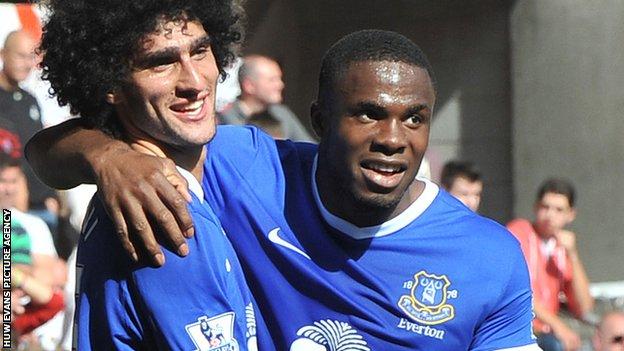 Victor Anichebe gave Everton a controversial opener when he volleyed home after a suspicion of handball from Marouane Fellaini in the build-up.

Kevin Mirallas finished a sweeping move on the second attempt to double the lead in a one-sided first half.

Dyer, a second-half substitute for Swansea's record signing Pablo Hernandez - who struggled on his full debut - lasted only 13 minutes after picking up a pair of yellow cards within a minute of each other.

By then Everton were in full control and the home side were fortunate not to have conceded more than one goal in the second half.

The visitors were sharper, hungrier and slicker from the first whistle as they maintained their proud record of never having lost to Swansea.

But for all their superiority, they were exposed at the back on a number of occasions and were thankful to fine saves by Tim Howard and a horrendous miss by Rangel.

Swansea were fortunate to survive a lethargic start as Michel Vorm saved first from Anichebe and then twice from Mirallas in the opening three minutes.

The warning signs were not heeded, however, and Anichebe's opener on 21 minutes had more than a hint of inevitability.

Fellaini caused the damage, controlling a long-ball into the Swansea area before poking the ball towards Anichebe, whose volley from six yards left Vorm hopeless.

There could be no doubting the merits of the goal, but the telling touch from Fellaini seemed to come off his arm.

Swansea's slumber lasted until 10 minutes before the break when they finally threatened as Miguel Michu headed over and Ki Sung Yueng, making his full debut, curled a 25-yard effort narrowly wide.

But Everton quickly re-asserted their authority as Mirallas doubled the lead with a classic counter-attack.

Phil Neville began the move deep in his own half, before Fellaini released Steven Pienaar down the right flank.

Pienaar's cross was perfectly weighted for the unmarked Mirallas, who nodded home after his initial shot was tipped onto the underside of the bar by the overworked Vorm.

For all of Everton's almost effortless dominance, Swansea could easily have gone into the break level.

Right-back Rangel was the unlikely source of the attacking threat as he was first denied by Tim Howard's leg and then somehow missed from two yards at the far post.

Michael Laudrup's response was to replace Hernandez, but Dyer's sending off encapsulated a day where nothing went right for the Swans.

The first card was for dissent and the winger was still clearly rattled as he flew into a wild challenge on Leighton Baines that almost warranted a red card in itself.

Moments earlier, the bar saved Swansea from a third as Mirallas - whose earlier goal was Everton's 7000th in league games - drilled a shot from inside the area.

Anichebe proved a constant thorn in Swansea's side, and more of his fine work was wasted when Fellaini blazed over from seven yards straight in front of Vorm.

A third seemed only a matter of time, and Fellaini made amends for his earlier miss eight minutes from time with a deflected header from Baines's cross.

Still there was time for Swansea to press for a consolation goal, and Jonathan de Guzman nearly obliged but his free-kick rattled Howard's crossbar.

"I have to say Everton deserved the win, they were better than us.

"We can learn from this. We were 2-0 down and had a good reaction, but the first 30 minutes was very disappointing, the worst we have been this season until now.

"The second yellow was a little unlucky, Nathan went to kick the ball, he missed the ball and in the same movement kicked his opponent but it was a yellow card and you can't say anything about it."

"We could have scored probably six or seven goals. But they had probably three or four good opportunities.

"The performance was fabulous, it really was. The players are playing really well, they're playing with a lot of confidence and self-belief.

"We felt we should have probably won on Monday night, and if we had done, we might have been in a better position than we are today.

"We have finished a lot of seasons strongly and the one year we got off to a good start we qualified for the Champions League and we have to do that if we can."