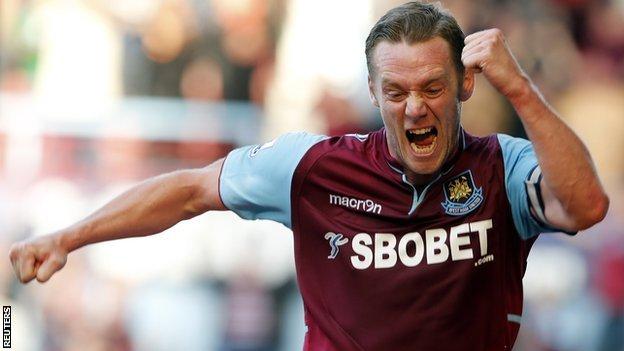 Kevin Nolan dramatically rescued a draw for West Ham with an injury-time goal against Sunderland.

In-form striker Steven Fletcher had put the visitors ahead when he angled home a powerful shot.

West Ham piled on the pressure but were denied when Nolan's volley was impressively saved by Simon Mignolet.

A header from Hammers defender James Collins struck the top of the crossbar before Modibo Maiga headed on to Nolan, who hooked in a shot.

The draw leaves Sunderland without a win in 12 league games since March and while the manner of the draw will leave them frustrated and deflated, they will also be sick of the sight of Nolan.

West Ham's skipper has scored six goals against them in the top flight, including a hat-trick for former club Newcastle in the Tyne-Wear derby against the Black Cats in October 2010.

The home side deserved at least a point as they finally broke the resistance of a Sunderland side who spent most of the second period camped in their own half trying to resolutely defend the 11th minute lead given to them by Fletcher.

There have been calls for the striker to resolve his differences with Scotland manager Craig Levein in order to regain his place in the national team.

"West Ham tried and tried for an equaliser but couldn't find a way though until deep into stoppage time when the player who looked most likely to score did as Kevin Nolan cancelled out Steven Fletcher's opener. You could argue Sunderland deserved a point for their stoic efforts but equally you can argue West Ham didn't deserve to lose."

His finishing prowess, including an impressive goal which put Martin O'Neill's side ahead, added weight to the argument.

Collins gave the ball away and winger Sebastian Larsson steered a cross to the far post, where Fletcher cushioned the ball to control with his first touch before driving in a left-foot shot past keeper Jussi Jaaskelainen.

It was a fourth goal in three top-flight games for Fletcher this season and, shortly afterwards, he showed there was more to his game when he held the ball up and released James McClean.

The Hammers had been kept at bay by the visitors until they ended the first half in the ascendancy and Nolan twice went close.

He acrobatically put a shot wide before meeting a Vaz Te cross with a sweetly struck volley. Mignolet flung himself to his left to palm the ball away for a smart save.

Sunderland had not won away in the league since February and their goal was living a charmed life.

But for all of West Ham's pressure, they were let down by some poor finishing.

Hammers striker Carlton Cole climbed highest when he rose to meet a Mark Noble free-kick, but his mistimed effort went wide off the top of his head.

Collins also had a good chance from a corner only to see his header graze the top of the crossbar.

It seemed West Ham would be punished for their profligacy before their captain struck.

Matt Jarvis did well to keep the ball in play and Maiga headed the ball on to midfielder Nolan, who swivelled and turned in a shot to preserve West Ham's unbeaten home league record this season, while Sunderland have now drawn all of their four top-flight games.

"In terms of play and chances we created enough to get back into the game.

"We had pinned them back and were waiting for the quality of finish, which came in injury time.

"Even in the dressing room the lads are disappointed we didn't win considering the attempts on goal we had."

"We are frustrated with the late equaliser in terms of the way it was conceded and the timing.

"We defended manfully but I thought we could have won. We had some good chances on the break.

"Overall, it was a tough game. We knew it would be and so it proved."