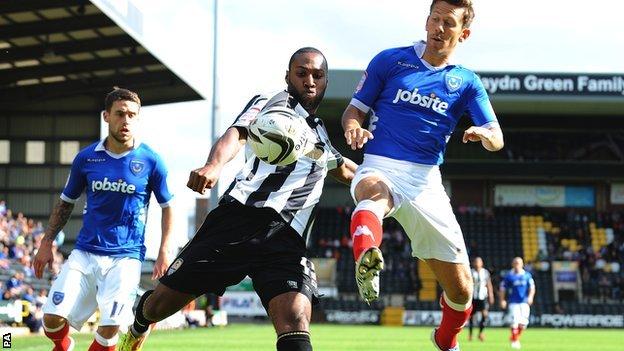 Yoann Arquin scored a goal in each half as Notts County moved up to second place in League One with a routine victory over ailing Portsmouth.

Arquin set the Magpies on their way to a fifth win in eight league games after just five minutes with a close-range strike from Alan Judge's corner.

Pompey rallied and matched the hosts until Judge fired home number two from long range two minutes after the break.

And Arquin rolled in a third to secure the points after a defensive lapse.

Portsmouth, despite their much-publicised off-field troubles, played with plenty of spirit and endeavour in a tight first period.

But they never looked like getting back in to the game once Judge smashed in a vicious second home goal from 25 yards soon after the restart.

The visitors had responded well to Arquin's tidy opener, but never looked like having the quality to trouble a Notts side who looked full of confidence and were able to play within themselves once they had established a two-goal lead.

Judge had two decent chances to extend Notts' advantage before he did find the net, chipping the first effort just over the bar after a good backheel by Jeff Hughes, and also having a low strike well saved by keeper Mikkel Andersen.

Jack Compton went close for the visitors at 1-0, however Notts cruised home after the interval.

Judge's dipping low effort settled the home side's nerves and Arquin made absolutely certain of a win which sees Pompey languishing in the relegation zone when he ran on to Judge's pass and coolly slotted the ball into the net.

"We took the lead and although I didn't think they caused us too many problems, I didn't think we had enough in midfield with the movement of our ball.

"I don't think we had enough direction in our play - which we tried to change at half-time.

"They simplified their game and I think did very well. I'm a big believer that you play how you practice."

"You've got to get the first goal in games to give yourself an opportunity, and then to go and concede in the first five minutes makes it obviously doubly difficult.

"To be honest I didn't think we had it in us, and that's why it was important that once the third went in that we made sure there was no more goals.

"Heads have been starting to drop in the dressing room for a long time, but that's not due to being beaten here today 3-0.

"That's due to other issues that we can't control, but we're not going to start feeling sorry for ourselves, it's too far down the line for all that."