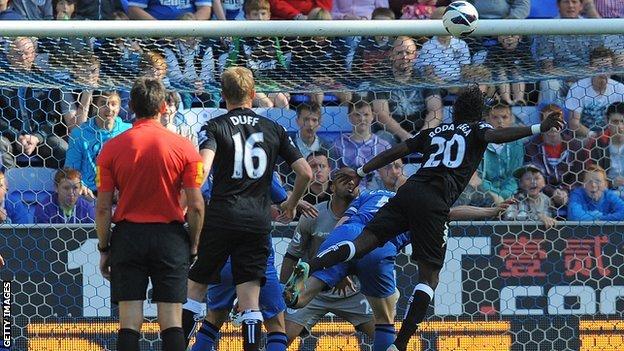 Hugo Rodallega scored against his old club to help Fulham to a well-deserved victory at Wigan.

The 27-year-old Colombian headed in his first goal for the London side from strike partner Dimitar Berbatov's superb cross on the half-hour mark.

Arouna Kone managed to pull one back for Wigan late on as he slid the ball home but Fulham held firm to secure their first away points of the season.

In stark contrast to last season, in which Martin Jol failed to win any of their opening six games, Fulham have now won nine points from their first five games.

Their first league win on the road was fully deserved, with summer signings Berbatov and Rodallega validating Jol's decision to pick them ahead of Mladen Petric and Bryan Ruiz, who had both recovered from injury.

The game started tamely, with the only exciting moment coming when referee Lee Probert was robustly upended by both Fulham's Steve Sidwell and Wigan's Ben Watson as he got in the way of the two opposing players as they battled for the loose ball.

The incident seemed to spark the game into life, with Rodallega meeting Berbatov's cross only to be denied by an alert Wigan goalkeeper Ali Al Habsi.

Roberto Martinez's side have lost six of their last seven Premier League games against London opposition. The exception was their 2-1 win at Arsenal in April.

Rodallega, who left Wigan in the summer when his contract ran out, showed again what they might be missing as he teed up Berbatov for an effort that Al Habsi pushed wide.

Wigan were struggling to cope with the pair and it came as no surprise when they combined again to put the visitors in front.

This time Rodallega headed past Al Habsi before respectfully apologising to the Wigan faithful for scoring against them.

Wigan had only mustered four goals so far this season before this game and with the man who scored two of them, Franco Di Santo, out with a calf injury they were struggling to find a cutting edge.

But the man who took his place in the team, Jordi Gomez, did go close before the break when he struck the underside of the bar with a powerful effort.

The second period began in similar quiet fashion before Kone squandered a chance after being put clean through by Shaun Maloney. With the goal at his mercy, Wigan's summer signing fired straight at Fulham goalkeeper Mark Schwarzer.

Substitute Ruiz troubled Al Habsi with a free-kick before teeing up Duff for the second.

Costa Rican Ruiz beat off four men to poke the ball across the area to the Irishman who struck past Al Habsi.

Fulham were moments away from a clean sheet until substitute Callum McManaman's shot pinged around the area before falling to the feet of Kone who slid the ball home, but for Wigan it was a case of too little, too late.

"It was a really open game with a lot of chances - something we can't be happy about. When you get so many, whoever is going to take them is going to win. We had our chances and we didn't take them.

Hugo Rodallega scored 24 goals in a three-and-a-half year spell at the DW Stadium.

"We want to win games at home and to do that you need more defensive intensity. Overall we need to be better.

"It is nice to get three points on the board. They are a difficult team. It was pleasing to see us taking the initiative.

"We needed that [second] goal as they scored in added time. You can't complain because they are a good football team, they deserved a goal too.

"One of the reasons that I played him [Rodallega] was because it was against his former team and he had extra motivation to score against his old club."