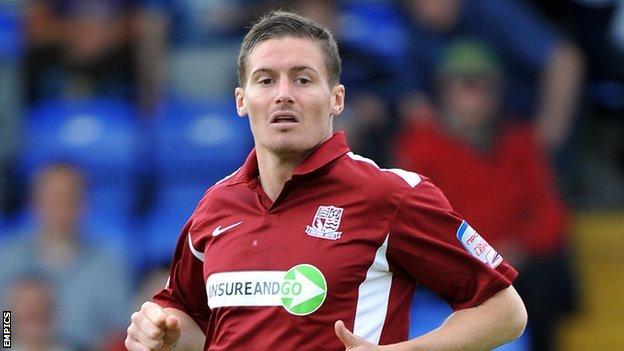 Barry Corr returned from a 17-month injury lay-off to help Southend come from behind and beat Exeter.

Scot Bennett finished off a sweeping move to put the visitors ahead just after the break.

Jamie Cureton fired straight at Daniel Bentley when one-on-one, and, with things looking bleak for the Shrimpers, boss Paul Sturrock threw on Corr.

And he powered home a header for 1-1, before Freddy Eastwood nodded in a late winner at the far post.

"Exeter got in the lead and obviously fans get disgruntled and players get disheartened, so it needed a couple of substitutions.

"Freddy [Eastwood] went on and got better as the game went on and obviously Barry Corr, with 17 months of pent up frustration, scored a header that went in like a bullet.

"He is nowhere near fit, but for that 20-minute cameo role he's ideal.

"You've got to give him credit where credit is due. He's hurting all over but he's prepared to die for the cause."

"We're very irritated that we've lost late. It's frustrating as we've played so well today and we were every bit as good as we have been on the road in the previous three games.

"We were very controlled, very organised, very sensible and defended really well. We controlled the game and at 70 minutes I thought we had just as much chance, if not more, of scoring a second as they had of scoring an equaliser.

"I'm not going to beat the players with it, they need to beat themselves about what they could have done at the end, that's their responsibility."