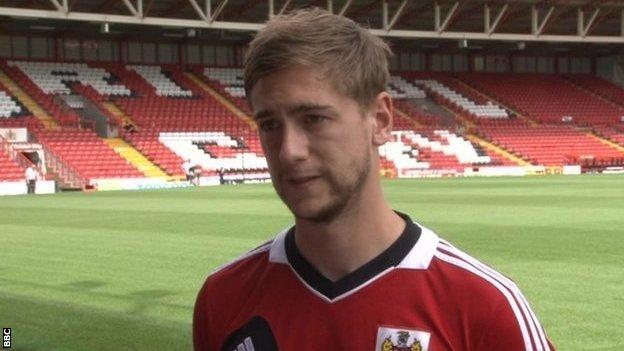 Watford ended a run of four straight defeats in all competitions but were denied victory by Steve Davies's late equaliser for Bristol City.

The Hornets took the lead just before the hour mark when James Wilson put the ball into his own net.

But after 83 minutes Davies scrambled the ball home from close range to score his first City goal and rescue a point.

Watford went into the game having found the net just twice in their previous three home fixtures in the Championship, but their early attempts to improve upon that tally were thwarted by Robins' keeper Tom Heaton.

The former Manchester United keeper had joined the Hornets in July but his deal was scrapped just days later after a takeover at Vicarage Road by the Pozzo family.

Heaton, who had been released by Cardiff at the end of last season, denied Nathaniel Chalobah, Mark Yeates and Sean Murray during a busy opening 45 minutes.

Watford keeper Manuel Almunia also made an excellent save to stop a 20-yard effort from Martyn Woolford as the game remained goalless at the break.

Woolford struck the post with a left-footed strike shortly after the restart, while Troy Deeney, back in the Watford fold after serving a prison term, came on as a substitute for Fernando Forestieri after 55 minutes.

Deeney immediately forced a save from Heaton, but the Robins' keeper could not stop Wilson from putting the ball into his own net.

Watford continued to press and Czech striker Vydra got on the end of Daniel Pudil's cross but Davies ended their hopes of collecting three points.

"If I focus myself only on that [twice losing the lead], yes, it's going to be very frustrating, but there's also a lot of good positive things I can take from this game.

"We created a lot, scored two goals. Yes, towards the end it was shaky, certainly not very healthy for the manager's heart, but I think a lot is down to the fact that many players are recovering from injuries so towards the end we got tired a little bit.

"But it's early days, we will improve that and once we do that it is going to be a very good team."

"I think we were slightly disappointing in the first half in terms of our retention of the ball and possession and creating chances, but we certainly picked it up in the second half.

"We showed great character to come back from a goal down on two occasions and eventually at the end we thought we could go and win it.

"So there's a little feeling of disappointment we couldn't win it but I think to take four points out of six at two tough venues, Peterborough and Watford, is a good return."