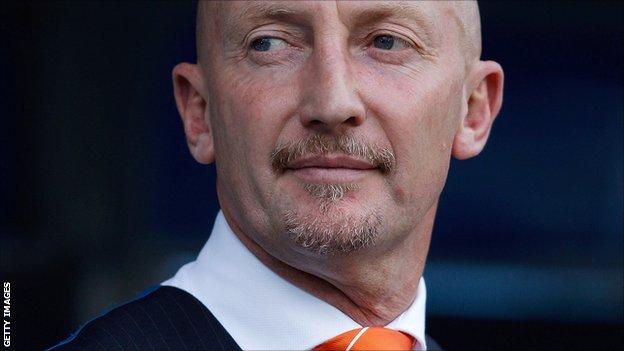 Ian Holloway says he is enjoying taking charge of a Blackpool team that are expected to win games and challenge for promotion from the Championship.

The Seasiders are second in the table after a 1-1 draw at Barnsley.

"We've never had that in our lives, or certainly any team of mine," Holloway told BBC Radio Lancashire.

"We've always been underdogs and I'm quite enjoying it. I want my lads to step up to the plate and I felt they did that on Saturday."

"I can put a fresh team out there, make some changes and let someone else take the responsibility of playing for Blackpool and having that expectation to come to away grounds and win now."

Blackpool fell behind at Oakwell to an early goal from Craig Davies, but Tom Ince struck on the half-hour to rescue a point.

"I think we got one thing wrong," said Holloway. "We let [Jacob] Mellis slip out of the bag and play a ball to Davies, who thumped it in.

"In the end I was very pleased. We kept going and should have won it in the end. I thought it was an excellent game of football and a great advert for this division."