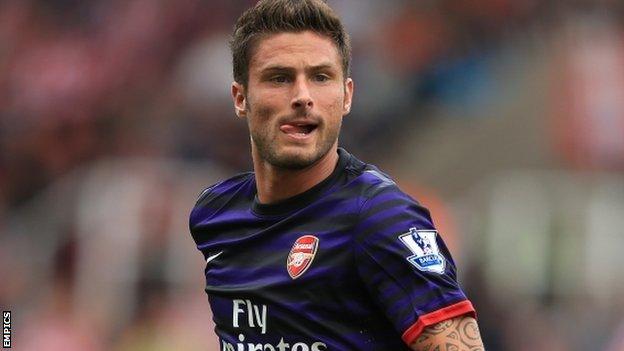 The France striker was relegated to the bench for the 6-1 win over Southampton and again failed to break his scoring duck in the 16 minutes he played.

I hope to receive a good reception from Montpellier fans

"What I will do on Tuesday, I honestly don't know," said the Gunners manager.

Giroud, 25, said last week: "I am an Arsenal player and I want to score and to win this game for Arsenal."

The forward, who was in France's Euro 2012 squad, joined Arsenal this summer, having finished last season with 25 goals for the Ligue 1 winners.

Giroud came on late in the second half against Southampton along with Theo Walcott, but unlike the England international failed to get on the scoresheet.

"I felt that he is under much pressure at the moment and sometimes to get a little breather is good," said Wenger of Giroud, who had started the previous league match against Liverpool.

Meanwhile, the France player said he hoped for a positive welcome from the Montpellier supporters when Arsenal visit the Stade de la Mosson.

"I hope to receive a good reception from the Montpellier fans, because I finished the top goal scorer there last season and worked hard for the title," the £12m signing also told Arsenal Player.

"I think the reaction will be good, but there may be some people who will boo maybe. It is always like this."