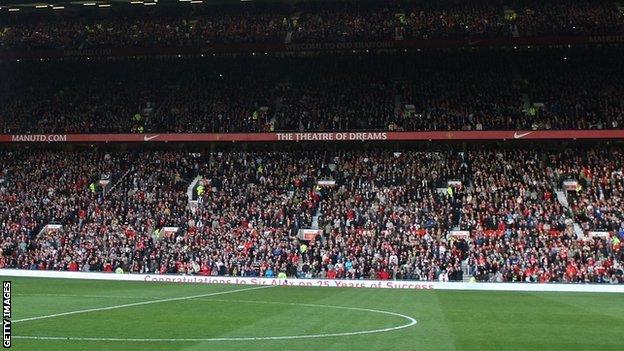 Supporters involved in tasteless chants at football matches should be banned for life, according to former Manchester United player Joe Jordan.

His comments came after a minority of United fans took part in anti-Liverpool taunts during the 4-0 win against Wigan, days after the report into the Hillsborough disaster was made public.

What they come out with has nothing to do with a football match. Neither they nor I can imagine the pain those people have gone through

"I can't quite get my head around why people come to football matches with that first and foremost on their minds," Jordan told BBC Sport.

"You have to eliminate it."

The former striker added that anyone found guilty of tasteless chants on Saturday should be "banned for life".

United released a statement after the Premier League match against Wigan saying they "deplored" the chants from fans at Old Trafford.

The clubs play each other this weekend and senior officials are to hold talks in an attempt to ensure the game at Anfield passes without incident with supporters showing decency and respect.

Last week United manager Sir Alex Ferguson called for both United and Liverpool fans to end the terrace barbs against each other.

"What they come out with has nothing to do with a football match," added former Scotland international Jordan.

"It's not getting at the players, it's getting at families. Neither they nor I can imagine the pain those people have gone through."

Jordan said he could not recall during his time as a United player ever hearing Liverpool fans chant about the Munich air disaster of 1958 that killed members of Manchester United's squad and coaching staff.

He added it was time to stamp out such behaviour.

"It's something that shouldn't really be happening," said Jordan, who played for United between 1978 and 1981.

But the Manchester United Supporters' Trust (MUST) insisted they were not a reference to the Hillsborough tragedy.

"Following this week's developments and release of revelatory information on the Hillsborough tragedy, MUST wishes to make it absolutely clear that, just as we condemn chants mocking the Munich air disaster, we also condemn any chants relating to Hillsborough, or indeed any other human tragedy," said MUST chief executive Duncan Drasdo.

"We did hear the usual anti-Liverpool chants at the match today but we're pleased to say, despite some reports to the contrary, there was nothing that was specifically referencing Hillsborough."

The findings of an independent report, released last week, cleared Liverpool supporters of blame for the deaths.