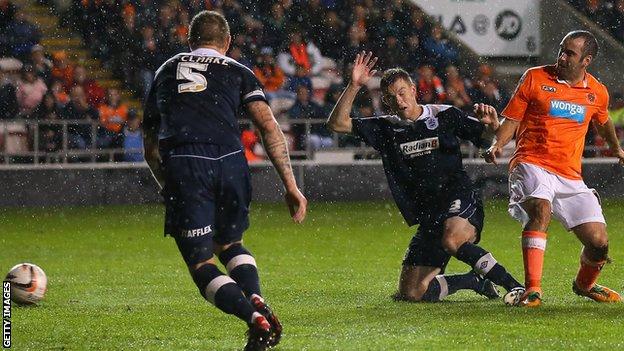 Huddersfield Town leapfrogged Blackpool to move into second place in the Championship with a deserved victory.

Lee Novak fired the Terriers into a 13th minute lead when he raced onto James Vaughan's flick-on and coolly finished under Matt Gilks.

The Tangerines pulled level in the 26th minute when Gary Taylor-Fletcher prodded home from eight yards.

James Vaughan headed Huddersfield back in front on half-time before Oliver Norwood hit a third from a free-kick.

But he had no chance with the opener as Novak outsprinted Ian Evatt to stroke the ball into the bottom corner.

Midfielder Tom Ince was Blackpool's biggest threat and set up the equaliser when he found space in the box and turned cleverly to squeeze in a cross that Taylor-Fletcher tapped in.

Huddersfield were soon back in front on the stroke of half-time when Vaughan powered home a header from six yards from Norwood's free-kick.

Norwood added the third three minutes into the second half when he whipped in another dangerous free-kick that was misjudged by Gilks and dropped into the corner of the net with the keeper failing to get a touch.

Vaughan had two goals disallowed for offside and headed wide from six yards as Huddersfield pushed for a fourth.