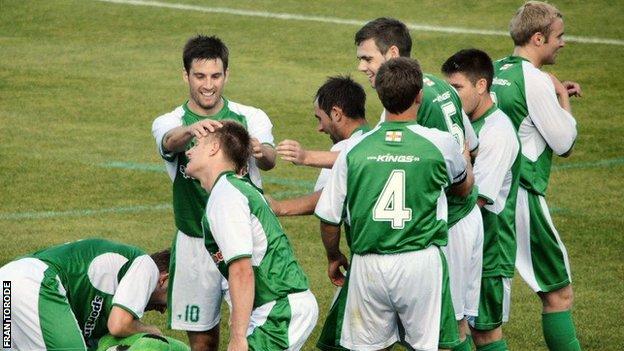 Guernsey are through to the first round of the FA Vase after beating Farnham Town 2-0 in the preliminary round.

Ross Allen opened the scoring midway through the first half, before Ryan-Zico Black's long-range effort on 66 minutes sealed the win at Footes Lane.

The win sets up a first-round tie at Kent Premier Division side Whyteleafe.

"No one can deny that we deserved to win the game. We scored two great goals and we created lots of chances," manager Tony Vance told BBC Guernsey.

But Vance says the island's supporters must not get too excited about the prospect of a trip to Wembley just yet.

"There's a lot of games to go before people can get excited," he added. "We're enjoying it, but it's going to start getting tougher now but that's what it's all about.

"We've got a team that got relegated from step four, so it's going to be very tough for us and it's away from home, and that'll be a challenge."