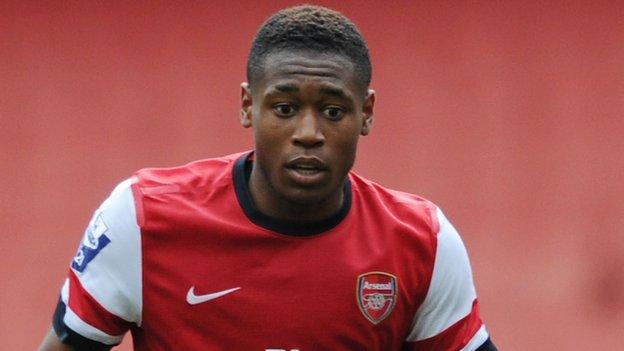 Crewe Alexandra will not appeal against the three-game ban suffered by on-loan Arsenal man Chuks Aneke following his red card on Saturday at Stevenage.

Making his first start for the Alex, at the club where he was on loan last season, Aneke received a straight for a two-footed lunge at Anthony Grant.

Crewe manager Steve Davis's initial assessment was that the decision had been harsh and he planned to appeal.

But Davis now says: "We have no complaints. It's a straight red."

The Alex boss, whose team let a two-goal lead slip to draw 2-2 at Stevenage, told BBC Stoke & Staffordshire: "At the time we thought it was a slip and he said it was too.

Chuks has to learn from this. Nick Powell had one at Shrewsbury early on last season. But he learnt a lot from it and it has all helped him become the player he is now

"But, having now looked at it several times from the opposite side, for whatever reason he does go in with two feet. He's off the floor.

"On this occasion, I can't back him up. He'll have to take his punishment and learn the lesson very quickly.

"When you've got young players from other clubs, you don't know the character. But he's not malicious. He's not that sort of lad.

"Whether it was a rush of blood, I don't know. But we'll give him the benefit of the doubt this time. He's just got to learn from it."

Davis points to the lesson learned by last season's star asset Nick Powell, sent off for a similar studs-up challenge in Crewe's 2-0 defeat at Shrewsbury 13 months ago.

Having served his ban, Powell then came back to hit 16 goals, inspire the Alex to promotion and earn a multi-million move to Manchester United, for whom he scored his first goal on Saturday.

"We've had similar rushes of blood from our young players before," admits Davis.

"Nick Powell had one at Shrewsbury early on last season. But he learnt a lot from that and it has all helped him become the player he is now."

Aneke's automatic three-match ban for violent conduct means that he will miss this Tuesday night's trip to Carlisle, next Saturday's home game against Leyton Orient and the following weekend's away match at MK Dons.