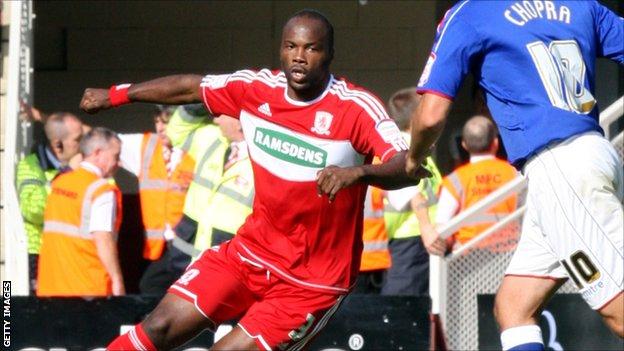 Bikey, 27, was handed his first start, four days after completing a move to the Riverside.

"The decision wasn't made until Friday afternoon, but he showed up well in training," Mowbray told BBC Tees.

"He's tremendously strong, different to our other defenders, a huge physical presence and we needed that."

Mowbray added: "We were compact and it helped him do what he's good at."

Lukas Jutkiewicz was also handed a first start of the season on his return after a knee operation.

The 23-year-old was sent on to replace the injured Ishmael Miller, who has an ankle problem.

"It was good for his confidence. He's had his half an hour on the field, he's impacted on the game and he'll get stronger the more games he gets," Mowbray added.

"He was disappointed not to be involved in the squad at Millwall. Whilst his brain was telling him he wanted to be in the side and playing, looking at him in training his body didn't look ready.

"He's had a couple of weeks training now and he's done well. He nearly scored with his first touch with a brilliant header and then he's had a shot that has whizzed past the post."