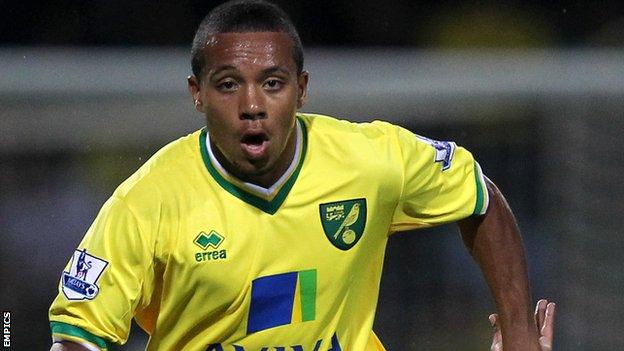 Midfielder Korey Smith says he wants to use his loan spell at Yeovil Town to impress his parent club Norwich.

The 21-year-old joined the Glovers on a three-month deal on Saturday, and came off the bench to make his debut in the 1-0 defeat by MK Dons.

He has not played for the Canaries since August 2011 and spent half of last season on loan at Barnsley.

"Coming to Yeovil will help me learn my trade and hopefully one day I'll be back up there," he told BBC Somerset.

Smith is a product of Norwich's academy system and signed his first professional contract in 2008.

He became a key figure in Paul Lambert's side that won the League One title in 2009-10, making 40 appearances.

He went on to make 28 appearances the following season as Lambert's side made it back-to-back promotions.

But Smith lost his place on the side's return to the Premier League and was then loaned out to Barnsley, where he made 12 appearances.

"I had a couple of good seasons there [at Norwich] - with two promotions - and I played a lot of games," he continued.

"But I picked up an injury at the start of last season and now they've brought in a lot of new players and have a new manager.

"I'm still young and I've got a lot to learn. I think this is a good place to do so."