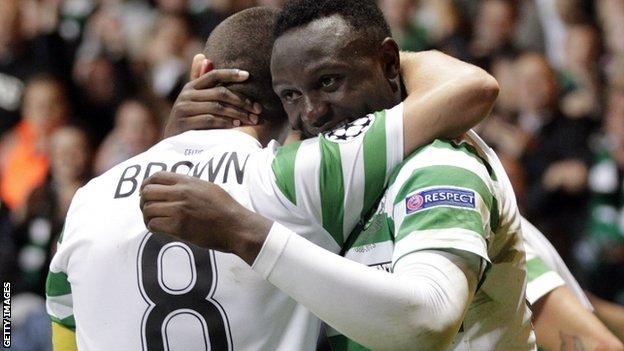 Celtic's players will not have a problem raising their game for the Champions League, according to the club's former midfielder, Paul Hartley.

He told BBC Scotland that Celtic's indifferent domestic form should not have a bearing on Europe.

Celtic are fifth in the Scottish Premier League table following a 2-1 defeat by St Johnstone.

But Hartley said: "It's the Champions League and the atmosphere will be special at Celtic Park."

Celtic, competing in the Champions League for the first time in four years, get their campaign underway against Benfica on Wednesday.

Neil Lennon's side are in Group G, which also includes Barcelona and Spartak Moscow.

And the Celtic manager has warned his players not to lose their domestic focus ahead of their European tilt.

"There will be 60,000 fans there and I think it's important they get off to a good start and try to win their home games," said Hartley, who starred for the club between 2007-09.

"I don't think Neil will have any problems getting his players ready for it.

"They had a disappointing result on Saturday, but that's forgotten about now.

"They've got to concentrate on the game against Benfica on Wednesday and I'm sure they'll be up for it."

"The home games will be really important and I think Celtic have shown on the road this year that they can win away from home," he added.

"Wednesday's game will be really important and if they get off to a winning start then it'll stand them in good stead."

The former Scotland midfielder believes his former club can qualify alongside the Spanish side.

"There's no doubt Celtic can and, with the home support, I'm sure Neil will pick the right team," he added.

"Hopefully, for Scottish football, they get the right result."