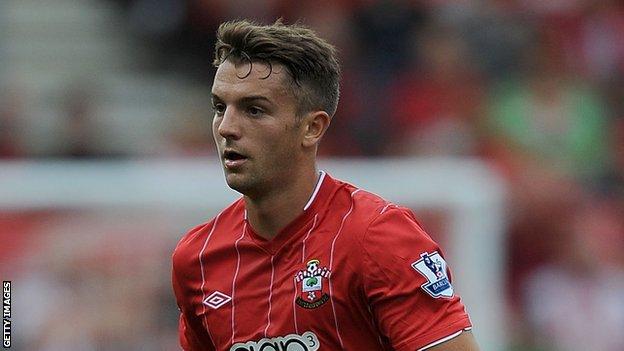 Two goals from Jay Rodriguez sent Southampton into the last 16 of the Capital One Cup at the expense of Sheffield Wednesday.

The home side dominated the first half and opened the scoring after 30 minutes when Rodriguez, 23, turned his marker to fire home.

Wednesday had chances after the break, with Nejc Pecnik proving dangerous.

Saints on a roll

Southampton's victory means they are into the last 16 of the League Cup for the second successive year.

Southampton went into the game looking to record a second successive victory, having beaten Aston Villa at the weekend to record their first Premier League win of the season.

Wednesday, meanwhile, were hoping the cup competition would bring some reprieve from their league campaign, which has the Owls without a win from their last four Championship fixtures.

Rodriguez was a menace from the outset and he volleyed wide from Guly Do Prado's ball before the former Burnley man was denied by Stephen Bywater when one-on-one with the Wednesday keeper.

But the youngster gave the home side the lead with 30 minutes on the clock as he picked up a pass from Richard Chaplow and turned his marker before smashing the ball into the net for his first competitive goal for Southampton.

That strike prompted a spell of pressure from the hosts, who were only denied a second by the woodwork when Do Prado's header hit a post.

Wednesday started the second half better as Nejc Pecnik came close with an audacious volley from outside the box six minutes in, before the midfielder worked space for himself inside the box but could not get the better of Wednesday keeper Paolo Gazzaniga.

But there was no way back for the visitors when Southampton added a second 12 minutes from time.

De Ridder went down inside the box under pressure from Mattock and referee Mark Halsey pointed to the spot. Rodriguez stepped up and though Bywater got to his spot kick, the ball squirmed into the net to wrap up victory for Nigel Adkins's side.

"Jay Rodriguez is at a good age for the club and has taken his opportunity. We know he is most comfortable in a central role but he has good competition in front of him at the moment.

"Whenever you get an opportunity, you've got to take it and he did that. Whenever he is needed, we know he is more than ready.

"We controlled long periods of that game. At half-time the main thing was could we improve our quality in the final third. It was a great night's work."

"We had chances but we have to defend. We can't keep giving the goals away that we are.

"They are stoppable and you need a base to work from but at the moment we are just finding it, for whatever reason, a little bit hard to keep a clean sheet.

"There are some good players in there but at the moment maybe one or two are not doing what they should be doing."