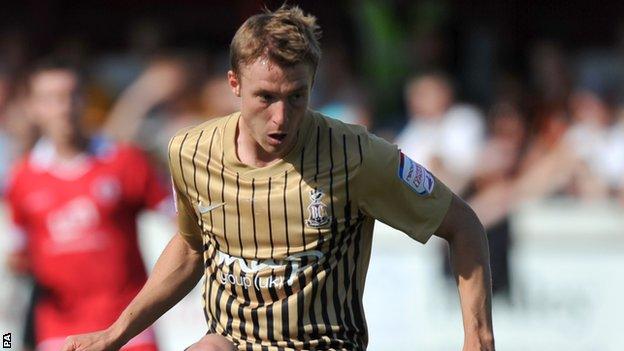 Stephen Darby struck an extra-time winner to take Bradford into the last 16 of the Capital One Cup for the first time in 24 years.

The former Liverpool full-back's 20-yard effort found the bottom corner as Phil Parkinson's side came from 2-0 down to beat their League Two rivals.

Burton were two up inside half an hour through Billy Kee and Aaron Webster.

But Nahki Wells scored twice in the last 10 minutes to force extra time before Darby struck the winner.

Bradford last reached the fourth round in 1988-89, and went on to beat Everton that season before losing out to Bristol City in the quarter-finals.

This season, Parkinson's side have already caused upsets by eliminating League One Notts County and Championship side Watford away from home, but they looked set to be knocked out by Burton until a remarkable comeback.

The visitors, who have never been beyond the third round of the League Cup, went ahead against the run of play when Kee smashed Jack Dyer's right-wing cross beyond keeper Matt Duke.

Zander Diamond scooped over a chance to add a second before Webster headed in Dyer's corner, with the assistant referee confirming the ball had crossed the line before Bradford captain Gary Jones nodded it out.

And as the home side piled on the pressure in the last minute, James Hanson's overhead kick fell for Wells to score from close range.

Extra time was a cagey affair and the match looked likely to go to penalties until Darby strode forward and struck a speculative shot that beat keeper Stuart Tomlinson and found the bottom corner.

"We were slightly fortunate to be two goals ahead, but we worked really hard and to see it slip away, I think the players are more disappointed than me really.

"I've just gone in there and told them they were all absolutely fantastic.

"We had one or two half-chances at the end if we'd just made another pass or another run, but I thought we were absolutely terrific."