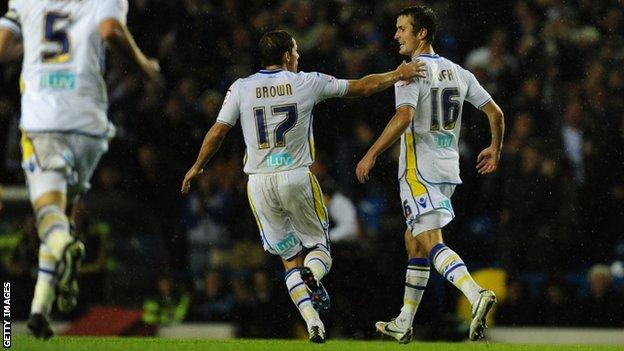 Leeds produced a rousing display to dump Everton out of the Capital One Cup on a breathless night at Elland Road.

Rodolph Austin delivered the knockout blow from close range 20 minutes from time, after Aidan White had given Leeds a dream start after four minutes.

Sylvain Distin pulled a goal back with a towering header nine minutes from time and Nikica Jelavic went close as Everton finally found their rhythm.

But Leeds stood firm to spark wild celebrations at the final whistle.

Leeds roll back the years

Everton manager David Moyes wore a look of disbelief at the final whistle, having made six changes from the side that beat Swansea so convincingly on Saturday.

And while the Scot may have questioned the commitment of his players, he could not dispute the result on a night when Leeds tackled, battled, denied space and dominated territory to reach the fourth round of the competition for only the second time in the past decade.

Tactically smart, Leeds' work-rate was also admirable, their players often doubling up on Everton's main threats like Marouane Fellaini, while Victor Anichibe found he had unwelcome, unstinting company throughout. El Hadji Diouf was tremendous throughout, frustrating and counfounding Everton's defence with a selfless display.

This was a rare whiff of the big-time for a club whose staple diet became top-flight football for so long - the glamour was in short supply, however. Thousands of empty seats and the driving Yorkshire rain saw to that.

But few were moaning about the weather when White erupted on to a loose ball after four minutes, surged beyond Fellaini and between the Everton centre backs before placing the ball beyond goalkeeper Jan Mucha and into the corner with a clinical left-foot shot.

White was on the end of another clever Leeds attack seven minutes before the interval, gathering the ball on the edge of the penalty area after a delighftul exchange of passes between Becchio and Diouf, but his shot was too close to Mucha.

Leeds could and should have extended their lead in the dying moments of the first half but Becchio's close-range header was parried by the unwitting Mucha and Steven Naismith clear the ball off the line.

Everton had to improve after the interval and they did. Steven Pienaar fired over from the edge of the penalty area as Everton began to tick. Anichebe picked out Naismith with a pinpoint cross from the left, only for the Scotland international to head woefully wide from six yards.

Yet still Leeds remained a danger. Diouf was a constant menace for Everton and his free-kick picked out Danny Pugh on the edge of the area and his uncertain goal-bound shot bobbled through a crowd of players before Austin steered it inside the post to send Elland Road into raptures.

Everton finally rose up to find hope and with it purpose to make a game of it. Pienaar's free-kick wide on the left was headed on by Anichebe and Distin rose up and headed forcefully beyond Leeds goalkeeper Jamie Ashdown.

Jelavic tested Ashdown with a header from six yards moments later, while a late penalty shout was waved away when Fellaini's struck Jason Pearce's shoulder. But Leeds weathered the cold, the rain and Everton's storm to cling on.