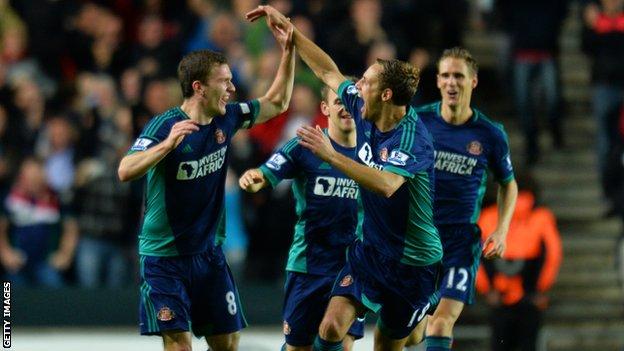 Second-half goals from Craig Gardner and James McClean helped 10-man Sunderland into the last 16 of the Capital One Cup against MK Dons.

Lee Cattermole was sent off in the first half, but the Black Cats still outclassed their League One opponents.

Cattermole was dismissed for the fifth time in his Sunderland career for a reckless challenge on Adam Chicksen.

But Gardner fired a 25-yard free kick past Ian McLoughlin before McClean struck a second from a tight angle.

The game lacked quality for large periods, although Louis Saha missed a couple of early chances as he made his first Sunderland start following his summer move from Tottenham.

Saha had a shot well saved by McLoughlin after McClean beat three Dons defenders, then curled an effort just past the post.

The home side had the best chance of the first half when a short corner caught Sunderland off guard and Stephen Gleeson's shot whistled wide from the edge of the area.

Cattermole saw red when he took a heavy touch in a charge forward from midfield and lunged into young full-back Chicksen as he attempted to win the ball back.

On the glory trail

Sunderland manager Martin O'Neill is looking to win the League Cup for a fifth time, having lifted it as a player with Nottingham Forest in 1978 and 1979, and as a manager with Leicester in 1997 and 2000.

Dean Bowditch bent a shot wide for the Dons just before the break, and Sunderland keeper Keiren Westwood had to tip over Darren Potter's long-range effort early in the second half.

But the Premier League side went ahead from Gardner's perfectly-struck free kick after Antony Kay had bodychecked McClean outside the area.

Substitutes Ryan Lowe and Charlie MacDonald both fired wide when presented with decent chances to equalise for MK Dons.

And McClean wrapped up victory with a fine individual effort, as he eluded several challenges to find space inside the MK Dons' penalty area and fire low past McLoughlin.

"I think we played well enough tonight but Sunderland have shown us tremendous respect. I'm looking forward to having a chat with Martin O'Neill and picking his brains so I can improve as a manager as well."

"I thought we deserved a little bit more out of the game to be honest and I think most people in the ground would agree with that.

"What a wonder goal that was at 0-0. That took the stuffing out of us."