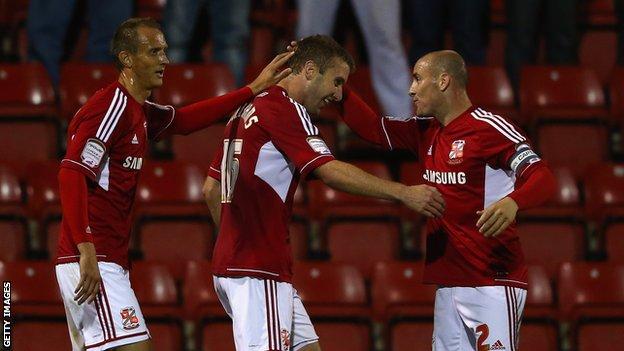 Swindon booked their place in the last 16 of the Capital One Cup with a 3-1 win over Burnley at the County Ground.

League One Robins opened the scoring with their first shot on target when striker Paul Benson fired home.

Andy Williams's third goal in as many games just before the break made it 2-0, but Burnley pulled one back through former Swindon striker Charlie Austin.

However, defender Troy Archibald-Henville nodded in from close range to complete the win late on.

Burnley, who are currently 16th in the Championship, became another higher division scalp for Swindon after the League One outfit beat Premier League side Stoke City in the previous round.

However, the Clarets started strongly and should have opened the scoring inside the opening 10 minutes when Austin got his head to a Ross Wallace corner only for Alan Navarro to clear off the line.

Swindon soon settled into the game and were ahead after 19 minutes. Gary Roberts played a short corner to Jay McEveley, who swung an inviting ball into the area and Benson was on hand to guide the ball into the net.

Burnley almost responded immediately when Austin chipped the ball into the area for Chris McCann, who headed towards goal but Swindon keeper Wes Foderingham gathered at the second attempt.

Swindon doubled their lead three minutes before the break when Tommy Miller stole possession in midfield before feeding a pass to Williams, who slotted the ball under Brian Jensen.

Swindon's victory over Burnley was their eighth over higher division opposition under Paolo Di Canio.

The visitors started the second half well and Foderingham had to be at his best to keep out Sam Vokes's point-blank header before McCann fired wide.

Swindon were still creating chances of their own, though, as Williams shot wide from 18 yards before Jensen did well to keep out Matt Ritchie's diving header.

Burnley looked to have set up a tense finish to the game when Austin halved the deficit with a goal against his former club. The striker, who left Wiltshire for a move to Burnley at the start of last year, was picked out by Vokes's superb pass and he rounded Foderingham before putting the ball into the net.

But the result was put beyond a doubt with seven minutes remaining when Archibald-Henville's header from McEveley's cross squeezed over the line.

"Maybe now we have a chance to go and play at a fantastic stadium.

"I would sign right now to play a Manchester United or Chelsea away. Maybe there is only a one in a million chance [to beat them] but I would like to try.

"It was disappointing because don't get me wrong, we wanted to win. It was a big opportunity to get into the last 16.

"With two wins in three you think we have turned the corner and we then seem to fall back again and it's a big challenge for us, because I don't think the ability in the squad is in doubt, but we have to deliver it."