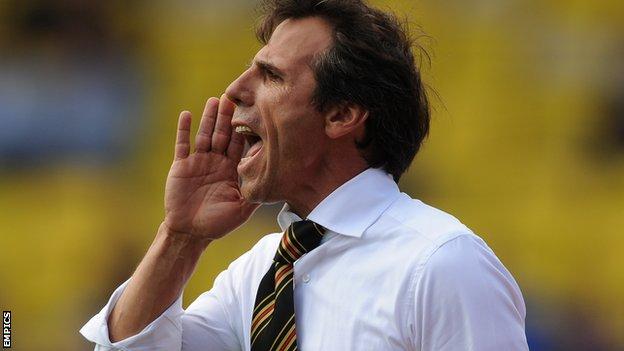 Watford manager Gianfranco Zola has admitted that he is facing a challenge to find places in the squad for some of their summer signings.

Sixteen players have signed since Zola took over in July, twelve of them on loan from Udinese and Granada, who are also owned by the Pozzo family.

"Certainly there have been more players than I was expecting," he told BBC Three Counties Radio.

"It's no pressure, it's a challenge and I see it in a positive way."

Some of the other signings have made one or two appearances or been on the bench, but others have suffered injuries and are yet to make the match-day 18.

Football League rules also state that on a match-day each squad must feature six home-grown players, and with only three of the 16 new signings meeting the criteria at least one will always have to miss out on selection.

With six players already out on loan, Zola has also acknowledged that he may have to send more of his squad out on loan in order to keep them happy.

"Maybe some players will go (to other clubs) to get some games but we are dealing with that."

Asked whether the players brought to the club were his choice, Zola replied: "The structure is that I play in a certain way and the club provides me with the best players to play in this way and then it's my choice to pick the players. This is the way we work."

Watford have only won two of their five Championship games so far and currently lie 16th in the table.