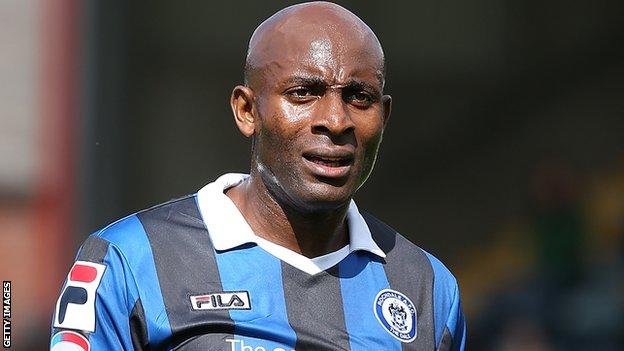 Rochdale striker Dele Adebola wants the club to go on an unbeaten run after winning their first away game in 10 months by beating AFC Wimbledon 2-1.

Adebola scored in the game, which was Dale's first three away points since beating Preston 1-0 in November 2011.

"It's good to finally get that monkey off our back," said the 37-year-old.

"We need to build an unbeaten run to get our confidence up because like everyone we're looking to get out of the division sooner rather than later."

Dale boss John Coleman wants an immediate return to League One following last year's relegation and demanded the squad improve results after a disappointing start to the season.

Adebola moved to Spotland after a trial at Burton following his release in the summer by Hull City.

The Nigeria-born forward has scored 162 goals for 12 clubs over a 19-year professional career and is looking to form a fruitful partnership with fellow new arrival Bobby Grant.

"At times it can be hard playing up front by yourself but I have Bobby Grant who looks as if he is going to score a bagful of goals for us," he told BBC Radio Manchester.

"He takes the extra centre-half away so I'm not battling two and it felt like a lot more room.

"I haven't [set a goal target] but I should do. In previous seasons I have, but I'll have a little think about that and see where I end up."