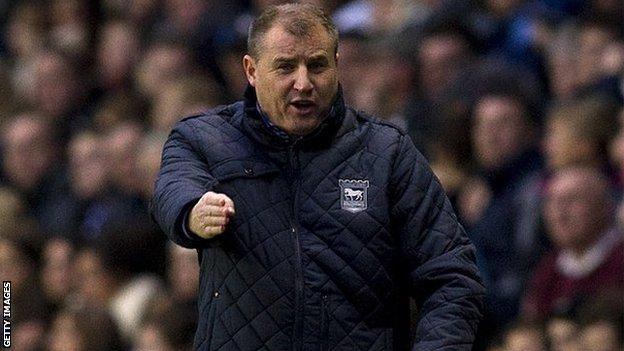 Paul Jewell has insisted he has no regrets about allowing Damien Delaney to leave Ipswich, despite his problems recruiting a new defender.

"It wasn't an ideal situation but he didn't want to be here."

Palace have won both games since Delaney signed a short-term contract, while Ipswich have slumped to second from bottom of the Championship table following Saturday's 2-0 defeat at Middlesbrough.

Jewell has had a number of defenders on trial at Portman Road - the latest being former Bolton and West Brom centre-back Abdoulaye Meite - but confirmed no new signings were imminent.

Ipswich have conceded 11 goals in five Championship games this season, an average of more than two per game.

Southend's French defender Bilel Mohsni rejected an extended trial for the club and a deal also appears unlikely for 6ft 5ins Kevin Pezzoni, who recently quit Cologne after being attacked by a group of fans outside his home in the German city.

"His father came over and I spoke with his father, then I rang his agent but it's going to be a difficult deal for us to do, so it probably won't happen," said Jewell.

Meanwhile, the former Bradford, Sheffield Wednesday, Wigan and Derby boss has urged supporters to recognise just how difficult it will be to win promotion from the Championship this season.

"I listened to a phone-in and there was a Derby fan on who was annoyed that they'd lost because they should be beating the likes of Huddersfield. When asked why, he said 'because we're Derby'," he added.

"We're not the only tream in this league who've got good history, a great fan-base and great facilties, most of them have this season and this is the hardest league to get out of that there's ever been, in my opinion."