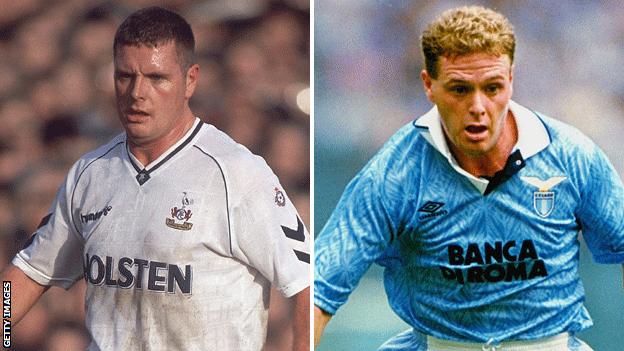 Thoughts inevitably turned to Paul Gascoigne when Tottenham were drawn in the same group as Lazio in the Europa League.

It's two decades since his £5.5m move from the old First Division to Serie A, a protracted transfer which had been delayed and needed to be re-negotiated following the ruptured cruciate ligament he suffered in the 1991 FA Cup final against Nottingham Forest.

That he didn't become for Lazio what Diego Maradona had been for Napoli in the late 1980s and early 1990s - a hope expressed by former president Sergio Cragnotti following his signing - didn't matter.

He was adored by the supporters in the Curva Nord, the section of the Stadio Olimpico where the Lazio diehards reside.

They thought of Gascoigne as one of them on the pitch. And at a club where triumphing in the derby with Roma is often considered of greater importance than conquering the league, his equalising goal in that fixture, a header from a Beppe Signori free-kick, was enough, together with strikes in other important games against Serie A's big clubs and a wonder goal against Pescara, to earn instant iconic status.

Paul Gascoigne for Tottenham and Lazio

Practical jokes, such as the time he brought a dead snake to training and put it into an unknowing Roberto Di Matteo's pocket certainly helped his legend. "I've never seen someone jump so high," he said.

The cult of Gascoigne has endured at Lazio long after he left the club in 1995 to join Glasgow Rangers.

"He is a mythical figure for Lazio fans and very popular in Italy," said Lazio general manager Maurizio Manzini. "I remember the Atalanta ultras who had a reputation for being really tough. They opened an enormous banner with a picture of a huge bottle of beer saying: 'This is for you Gazza'.

"There is always a corner of Tottenham in our hearts. I hope we will have the chance to see him in London and we will invite him to the match in Rome."

Meanwhile, his former club, the Aquile - or Eagles - as Lazio are known in Italy, have made a flying start to the season.

A hat-trick of victories from their opening three games in Serie A is a feat they haven't achieved since the 1974-75 campaign when Lazio, fired by the late Giorgio Chinaglia, began the defence of their first ever Serie A title under legendary coach Tommaso Maestrelli.

Few expected great things of Lazio ahead of the new season, which in some respects is strange considering they have been consistently in the upper echelons of Serie A for the last two years.

If it weren't for the overachievement of Udinese in the same period, they'd be talking about Lazio as the league's revelation. Recognition has been lacking.

In 2010-11, Lazio finished fifth, missing out on qualification for the Champions League preliminaries on goal difference.

In previous years it would have been good enough for entry into the Champions League preliminaries but, since the Bundesliga had overtaken Serie A in the Uefa co-efficient rankings and were awarded an extra place in the competition at their expense, Lazio have had to make do with the Europa League.

Still, why was there not much faith in their chances this season?

First, a veteran squad wasn't greatly rejuvenated or reinforced. The suspicion remained that, had Lazio not let Djibril Cisse and Giuseppe Sculli go to QPR and Genoa in the new year, they'd have been able to cope with an injury to star striker Miroslav Klose towards the end of last season, an injury that cost the club a higher finish.

When the issue wasn't addressed in the summer, concern that Lazio were dependent on an ageing but world-class forward remained.

Second, finally accepting one of several of coach Edy Reja's offers to resign, Lazio appointed Vladimir Petkovic, a relatively unknown quantity outside of Switzerland, the country where he'd worked most, without any experience of Serie A or any other major league in Europe for that matter.

Tottenham supporters, however, will remember Petkovic.

He was the coach of the Young Boys Bern side that gave Spurs a real fright in the Champions League preliminaries in 2010. They won the first leg at the Wankdorf 3-2 before capitulating 4-0 at White Hart Lane.

Petkovic is an interesting character. Born in Bosnia, he left Sarajevo aged 17 to play in Switzerland. After a modest career, not sure what direction he wanted to take, Petkovic worked for Caritas, a Catholic relief, development and social service organisation.

Towards the end of his time in the job, he coached second division Bellinzona, gaining promotion and reaching the Swiss cup final where they lost to Basle.

But that aside, what, asked a sceptical Italian press corps, had Petkovic done to deserve a place on the Lazio bench and why had he been preferred to the front-running candidate Gianfranco Zola?

He hadn't won any major honours in Switzerland, after all, and had been sacked at Samsunspor in Turkey. "We chose Petkovic because of other qualities," Lazio president Claudio Lotito explained. "He is a polyglot."

Indeed he is. Petkovic speaks eight languages, a fact that has certainly helped his adaptation, the communication of his ideas and management of the dressing room.

His teams tend to play several formations too. Petkovic's influences are many and they include the manager of Tottenham's North London neighbours.

"I've watched how others coach," he told Il Corriere dello Sport. "Certainly I liked the ideas that Arsene Wenger had with Arsenal a lot. I have never copied, mixing things and ideas. I tried to steal everything that I found to be good from other coaches in order to develop my own ideas. For example, I have always liked the solidity of Fabio Capello."

So far Petkovic has proven to be an inspired choice of manager by Lazio. With more or less the same team as his predecessor, he has already given the impression that he has taken them on a level.

Tottenham should be wary.