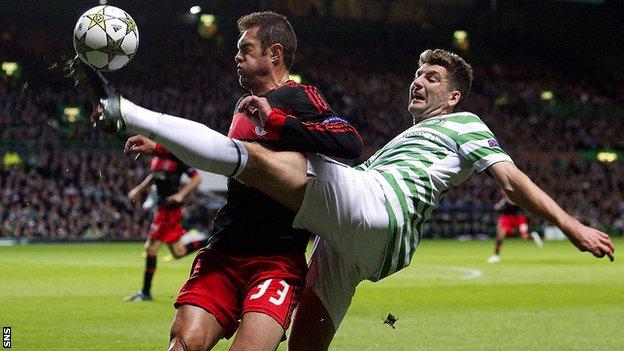 Celtic were left to rue a pedestrian performance as their return to the Champions League group stages ended in goalless stalemate against Benfica.

The scoreline tells an accurate tale in that neither side did enough to really trouble the opposition goalkeeper.

Artur's biggest concern came from a Kris Commons shot from inside his own half, with the visiting defence coping well against Celtic's attack.

The enormous and highly vocal home fans must have expected more from their side, especially as they made the kind of lively start manager Neil Lennon had demanded of them.

They might have been in front inside five minutes from a Commons corner, but neither Victor Wanyama nor Charlie Mulgrew could smuggle the ball over the line.

Maintaining that high tempo looked key to Celtic's chances of success, but it was all too quickly allowed to dip as the game developed into a rather insipid midfield battle.

It was fully 32 minutes into the match before either keeper had a save to make, and on that occasion it was Forster.

Rodrigo galloped into the box looking to latch onto a beautifully weighted pass over the top of the Celtic defence by Enzo Perez, but Forster was quick to race off his line and block the striker's shot.

The lack of excitement at the other end was such that good work from Miku to earn a corner was met with thunderous applause, as was a bone-crunching Kelvin Wilson challenge when Benfica threatened on the breakaway.

Lennon must have asked his players to step up their efforts at the interval and Commons was unfortunate to see a goal-bound shot blocked by Garay a couple of minutes after the restart.

Shortly afterwards, following a weak punch by Artur from a Commons free-kick, Adam Matthews also saw a strike from the edge of the box deflected behind for a corner.

Wilson had been taking a few chances at the back for Celtic and was hugely fortunate to get away with some ponderous defending under pressure from Rodrigo.

Benfica had only very sporadically suggested they could hurt Celtic, but when Rodrigo and Pablo Aimar linked to set up Nicolas Gaitan after an hour, it was the Celtic defence breathing a sigh of relief as the shot from 10 yards was deflected wide.

Forster was then forced to push the ball wide as Garay glanced a header goalwards from the corner kick.

With 15 minutes remaining, Celtic had Thomas Rogne to thank as he dived to put his body in the way of a point-blank drive from Gaitan before, moments later, Commons almost caught Artur out with a shot from inside his own half.

Commons and Scott Brown were the only Celtic outfield players who could justifiably be content with their performances, with too many others unwilling or unable to go beyond the workmanlike.

The home side howled for a penalty with nine minutes left as James Forrest tumbled under the challenge of Garay, but Italian referee Nicola Rizzoli was unimpressed.

And though Celtic huffed and puffed their way towards the Benfica goal during the closing stages, a victory never looked likely.

The two sides trail Group G leaders Barcelona, who had to come from behind to beat Spartak Moscow 3-2, and with a trip to Moscow to come on 2 October, Celtic will have to improve considerably if they have genuine designs on making the knockout phase.