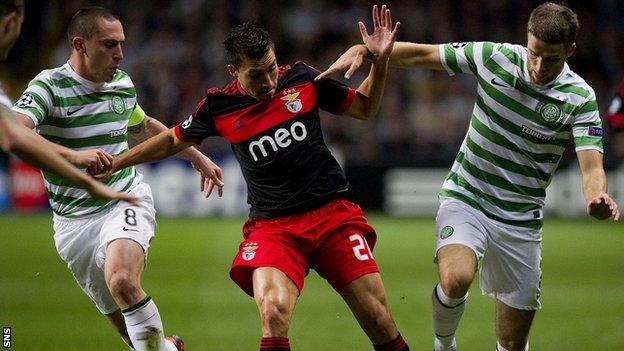 Celtic manager Neil Lennon said his side should have "gained respect from the footballing world" after opening the Champions League group phase with a goalless draw against Benfica.

"Benfica went into the game as heavy favourites and I don't think you could call the game," Lennon said.

"I hope we've gained a little bit more respect from the footballing world.

"There's a lot of positives to come out of it and we move forward with a lot of confidence," he added.

But he conceded that failing to win at home put a greater onus on his side to pick up away points, with difficult trips to Barcelona and Spartak Moscow, and the return in Portugal to come.

Celtic have never won on the road in the Champions League group phase, with a record of one draw and 17 defeats.

"It makes things a little bit more difficult for us but it's not insurmountable," said Lennon. "Ideally, you would like to win your home games.

"We will have to maybe get something away from home in one of the games anyway, which we know is a tall order with our history in the competition, but this is a different team and a different animal.

"We played with real zest and no fear against a class side, so it's a decent start."

Celtic visit Moscow next, with Spartak bottom of Group G after losing 3-2 at Camp Nou. Lennon is adamant his players will be up to the challenge, while conceding there would need to be further improvement.

"The players have sampled it now, they've had a feel of it," he said.

"There were 10 guys making their Champions League debut against a very experienced Champions League side, so I'm very proud of the team. I think we might have lost that game this time last year.

"We just lacked that little bit of cutting edge because we worked the ball, at times, into good areas. Overall, there were some superb performances. Benfica will probably be the happier going away from the game but there wasn't anything, really, between the teams."

The Celtic boss, who confirmed that England goalkeeping coach Ray Clemence attended the match to watch Fraser Forster, felt he was "immensely" hampered by his lack of striking options, with Georgios Samaras unavailable and Gary Hooper only named on the bench after picking up a knock at the weekend.

But he hoped Samaras would be fit for trip to Moscow on 2 October.