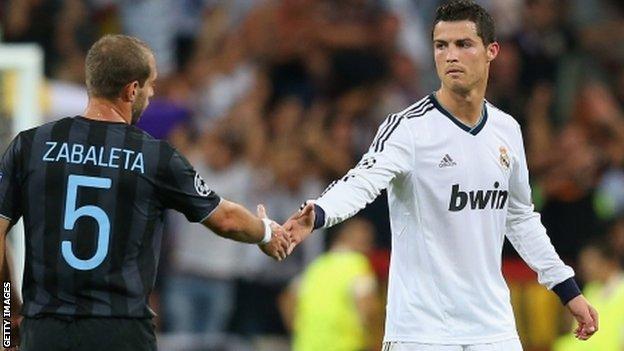 Leading 2-1 with less than three minutes to go, Manchester City looked set to become only the third English side to beat Real Madrid at the Bernabeu.

But instead of beginning their Champions League campaign with a famous victory, Roberto Mancini's men were left to rue what might have been.

What went wrong for City in their first match in Group D?

Maicon was not at the races at all in the first half at right-back. He was a passenger and it was like City were playing with 10 men. Cristiano Ronaldo kept cutting inside him.

Cristiano Ronaldo's winner for Real Madrid was his 39th Champions League goal - only three fewer than the entire Manchester City squad - in 81 appearances.

In the second half, Vincent Kompany looked at what was happening and came across to that wing more. Ronaldo did not have the beating of Kompany and he started to get frustrated.

But, even so, Marcelo was allowed to come inside more and more, as he did for his goal.

For the Real Madrid winner, City let Ronaldo move inside too easily. He went past Pablo Zabaleta as if he wasn't there.

Zabaleta, who replaced Maicon, needed to stop Ronaldo at source. He was on the bench for most of the game watching Ronaldo take apart Maicon and didn't learn. He should have seen what was happening.

Did City's formation put them under pressure?

It was too easy at times for Real Madrid, especially in the first half. With the 4-3-2-1 formation that City play, with two holding midfielders in Javi Garcia and Gareth Barry, it meant the Madrid full-backs could go forward.

English wins at the Bernabeu

Arsenal won 1-0 in a Champions League second-round clash in 2006, with Thierry Henry scoring the winner

Liverpool also won 1-0 in the first leg of a Champions League second-round tie, when Yossi Benayoun scored their winner in 2009

If Mancini wants to play Garcia and Barry - plus Yaya Toure in that position behind Carlos Tevez - he has to go out in the transfer window and buy a Xabi Alonso-type player to do that job.

At the Bernabeu, whenever Garcia or Barry got on the ball, there were men all around them. Madrid were pressing all over the pitch.

City were over-run, especially early on, and Real made changes, bringing on Mesut Ozil, Luka Modric and Karim Benzema when they fell behind.

A heavy price for a late lapse

In terms of chances created, Madrid deserved to win the game but, having led with less than three minutes to go, City should have got at least a point.

"What a fantastic game. Sometimes it doesn't go like that in the group stage, but that was incredible. Even the draw probably wasn't good enough for Madrid. Man City were so close to making a superb start but they know this is going to be a tough group. Every single point will be fought for."

Madrid would have scored at least once in the first half if it wasn't for Joe Hart, who was brilliant, but City were terrific in the second half.

After Edin Dzeko scored, they could have gone 2-0 up when Yaya Toure missed a decent chance.

With a 2-1 lead, they just have to keep the ball. They have experienced and fantastic players who know that - and who can do it too.

It made it a great game to watch but City have to start learning in the Champions League. They were great at times but that was such naive defending.

When Madrid were ahead, there was no way they were giving the ball away.