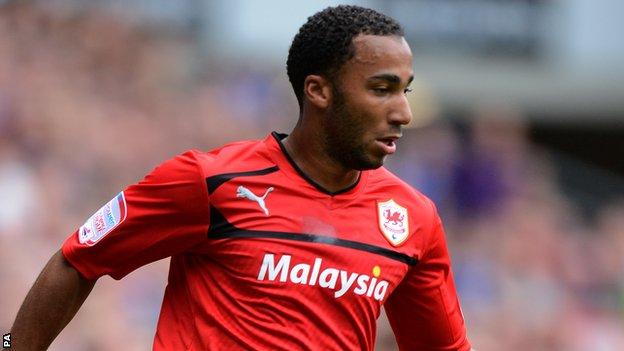 Cardiff City striker Nicky Maynard is unlikely to play again this season after suffering a torn anterior cruciate ligament in his knee.

The 25-year-old suffered the injury during the second half of Cardiff's 2-0 win at Millwall.

"I'm devastated, obviously I came to Cardiff to play regularly and score as many goals as possible," Maynard said.

"Three games in I get an injury like I have and I'm out for six to nine months, which isn't ideal."

Maynard joined Cardiff from West Ham for an undisclosed fee in August.

The former Crewe and Bristol City player made three appearances for Cardiff after joining on transfer deadline day but had yet to score for his new club.

Now I've got it in my head that I'm not going to play again this season, if I do then it's a bonus

Maynard was taken off by stretcher during the second half of the Championship game at Millwall's New Den home.

"I'm just desperate to get back as soon as possible and obviously put a smile on the Cardiff fans' faces and hopefully get them seeing me scoring more goals," Maynard said.

"Now I've got it in my head that I'm not going to play again this season, if I do then it's a bonus.

"If I concentrate on doing my rehab as well as possible then I may be back sooner than that, but the main thing is that when I am back I'm back... without any problems."

Maynard was speaking at a Give Racism the Red Card event that was given added meaning after England Under-21 defender Danny Rose claimed that he was racially abused during a qualfying match in Serbia this week.

The game was further marred after fans ran onto the pitch and scuffles broke out after the match.

"What happened in Serbia shouldn't happen and it's not a nice thing to go through," Maynard said.

"I'm friends with Danny Rose and I can imagine how bad it was because he said that after an hour of the game he couldn't concentrate on football.

"That's not what football's about and we need to kick it out sooner rather than later."