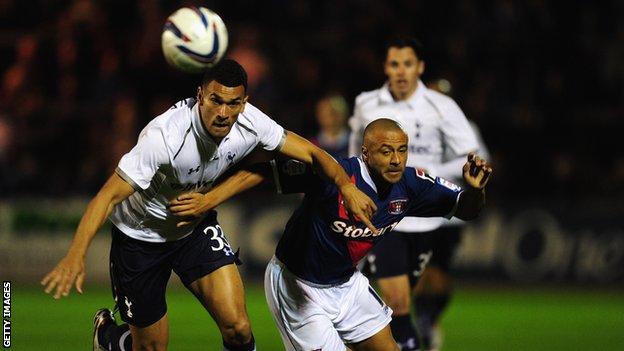 Goals from Jan Vertonghen, Andros Townsend and Gylfi Sigurdsson gave Tottenham victory over Carlisle to earn them a trip to Norwich in the last 16 of the Capital One Cup.

The visitors took the lead shortly before the break when Vertonghen headed home Sigurdsson's free-kick.

Townsend put Spurs in control with a 53rd-minute second, running from the halfway line before finishing.

Sigurdsson wrapped up the scoring when he nodded in Kyle Walker's cross.

Tottenham made eight changes from the side that beat QPR at the weekend, with defender Michael Dawson and midfielder Tom Huddlestone both coming into the side.

Carlisle, meanwhile, made just one change from their League One win over Coventry on Saturday, with cup-tied Joe Garner replaced by on-loan Huddersfield forward Kallum Higginbotham.

The hosts, who went into the game looking to extend their unbeaten run to six games, started well with ex-Everton striker Danny Cadamarteri, 32, causing the Spurs defence problems on a couple of occasions.

Tottenham were looking the more dangerous going forward, however, and it was they who had the first effort on target as Sigurdsson cut the ball back to Iago Falque, but his shot was saved by Mark Gillespie.

Falque again tested Gillespie just before the half hour mark when his drive was parried by the Carlisle keeper, before Clint Dempsey's follow-up was cleared off the line.

Tottenham have won the League Cup four times previously, with their last success in 2008 when they beat Chelsea in the final.

But the deadlock was broken in the 37th minute when Tottenham won a free-kick and Sigurdsson sent the ball into the area where Belgium international Vertonghen was on hand to head home.

Carlisle came close to an equaliser two minutes later as the lively Cadamarteri fired a shot towards goal, but Steven Caulker managed to get in the way and head the ball out of danger.

It was perhaps an important intervention as Tottenham added a second goal eight minutes into the second half to effectively end the game as a contest.

Townsend picked up the ball on the halfway line, raced towards goal before getting the better of two defenders and then firing a low shot into the back of the net.

Carlisle showed plenty of endeavour in the closing stages as they tried to find a goal that would set up an exciting finish.

It was not to be, however, as Sigurdsson opened his Tottenham account with an 89th-minute third, heading Walker's cross beyond Gillespie.

Tottenham assistant boss Steffen Freund: "I know eight Premier League sides are already out, and there are only two games and then we are in the semi-final.

"I can remember 1999 when I won the League Cup - it is special to go to Wembley and I think the players will start to think about that now.

"We brought a few young players in and we believe in them all. Adam Smith was fantastic at right-back and Ryan Mason has been scoring in the development squad, so we knew he can play. Then in the centre of midfield Tom Huddlestone is back after his injury, Michael Dawson is back.

"There are young players coming through which is nice to see, and it is especially nice to know that we have someone (Townsend) behind Gareth Bale who can jump in and create something."