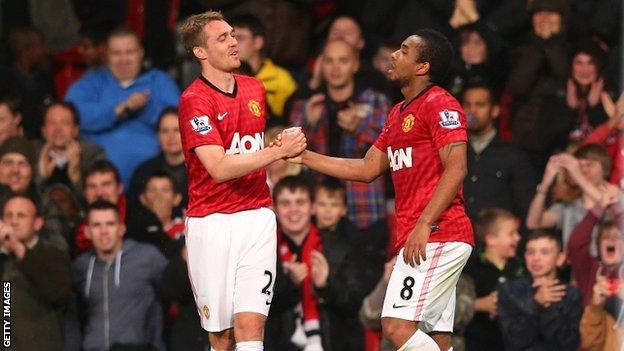 Manchester United battled past a resurgent Newcastle to earn a Capital One Cup fourth round tie at Chelsea.

Anderson scored when he marched towards the visitors' defence just before half-time and fired into the bottom corner.

England midfielder Tom Cleverley, 23, made it 2-0 from 18 yards with his first Manchester United goal.

Papiss Cisse's introduction almost sent the game to extra time when he scored with a close-range header and hit the bar with an overhead effort.

The Senegalese striker was rested alongside a number of other Newcastle first-teamers, but he made a real impact by scoring his first goal of the season two minutes after coming on and Dan Gosling could also have equalised with a tame late effort.

Javier Hernandez also hit the bar after Cisse's goal, but the hosts were hanging on as Alan Pardew's side finished strongly.

Wayne Rooney returned for the home side, after suffering a nasty leg injury against Fulham a month ago, and Darren Fletcher was made captain on his first start in 10 months - but Cisse's introduction put pressure on a young back four that had just two senior appearances between them.

For most of the game, debutants Scott Wooton and Marnick Vermijl, alongside Michael Keane and Alex Buttner, coped well, with Buttner impressing down the left.

Manchester United boss Sir Alex Ferguson will be content they came through this test without any serious problems and the performances of Anderson and Cleverley, and an understandably tiring Fletcher, would also have pleased him.

Before their goals, both midfielders could have scored - but Newcastle keeper Rob Elliot saved the Brazilian's effort while Cleverley was inches wide of the post.

Fortunately for the hosts, Anderson made amends when he collected Fletcher's pass and strode towards goal to fire a 20-yard shot in off the left-hand post.

And Cleverley's goal came when slack marking on the edge of the box allowed him to steer his shot into the bottom corner.

Fabricio Coloccini and Cheick Tiote were back in the Newcastle side after injury and there were opportunities for the Magpies, as first Gosling miscued from 10 yards and then Shola Ameobi's header was saved by David de Gea.

The game looked out of reach as Cisse and fellow substitute Shane Ferguson were brought on at the hour mark, but the substitutes combined as Cisse headed in Ferguson's inviting cross to set up an exciting finale.

"The media can't hang that tag round Papiss' neck that he has not scored anymore. That goal means everything to him. There is nothing in his work-rate that has changed. Sometimes a goal can make a difference.

"You could see that little bit of exuberance return to his game with the overhead kick. I thought that was in."