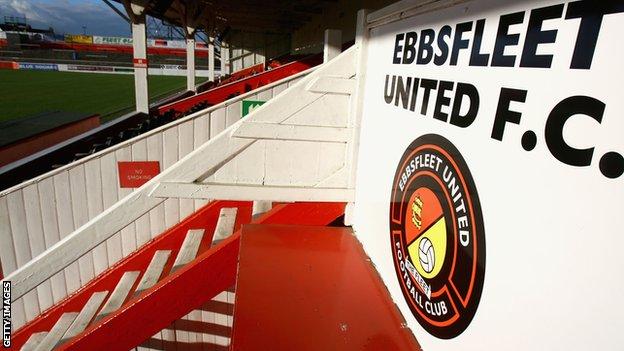 Ebbsfleet United's Lanre Azeez and Jay Folkes are set for spells on the sidelines after gaining injuries in a midweek Kent Senior Cup fixture.

Azeez (hamstring) and Folkes (dislocated shoulder) both had to be substituted in the first half of Ebbsfleet's 5-1 win over Whitstable.

Manager Liam Daish told BBC Radio Kent: "It could have happened in any game.

"There's a little bit of a price but you can't protect players in every game. We're down to the bare bones."

Ebbsfleet, who favour a 3-5-2 formation, only have two recognised central defenders fit, with Patrick Ada suspended following his sending off against Southport on Saturday.

You can go from having a good squad with a few options to bang, down to the bare bones

"Ryan Blake might still be out. It depends on what they come back with on Thursday.

"Things can change very quickly. You can go from having a good squad with a few options to bang, down to the bare bones."

Despite the injuries, Daish believes his squad benefited from the run out.

"We wanted to put in a good performance in preparation for a massive game on Saturday," added Daish.

"It could have been easier for me to play some kids but we wanted to get back to winning ways because winning can be a habit."