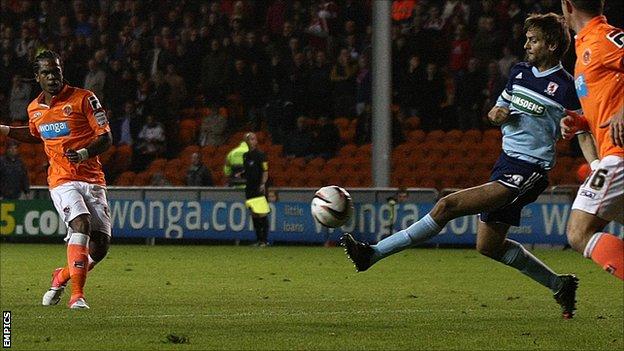 Middlesbrough manager Tony Mowbray has defended his side's preparations for Tuesday's 4-1 defeat by Blackpool in the Championship.

The Teessiders are yet to win away from the Riverside this season, with the setback at Bloomfield Road preceded by losses at Barnsley and Millwall.

"I'm comfortable with our preparation for the game," Mowbray told BBC Tees.

"Everybody knew the importance of the game, Blackpool's threat, and there was no complacency. They played very well."

Mowbray added: "Their top players, the players with the threat, did just that, and at times we didn't handle it."

Despite two goals from Nathan Delfouneso, on loan from Aston Villa, Andre Bikey's first Boro goal on the stroke of half-time gave Mowbray's side hope in the second period.

However further strikes from Tom Ince and a penalty from Elliott Grandin ensured a downbeat trip back across the Pennines was to follow.

"The system we set up with was a counter-attack system; Marvin Emnes and Mustapha Carayol either side of Ishmael Miller who can run as well," Mowbray added.

"And yet Blackpool were good, they asked too many questions and we never really nicked it off them and broke at them.

"It was a system that was set up to be defensively strong with only one striker, but they kept the ball very well.

"I have no regrets with the way we set the team up, because we set up to counter-attack and score goals."