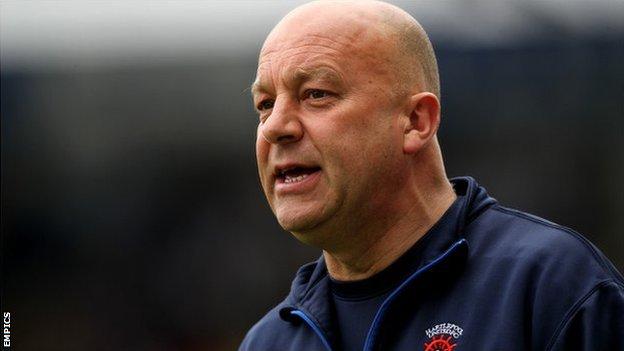 Hartlepool head coach Neale Cooper has told his underperforming players they are free to walk away from the club after Tuesday's 5-0 defeat at Preston.

The loss marked the second time Pools have conceded five goals this season and extended their winless run to three League One matches.

"If anyone wants to leave this club, they can see me and walk out the door tomorrow," Cooper told BBC Tees.

"If they want to stay, they'd better start performing and showing bottle."

"They need to show pride for this club, because this club deserves it."

Pools' performance was in contrast to Saturday's 1-1 draw with Bournemouth, where Cooper's side were minutes away from a second success of the season before Matt Tubbs's late equaliser.

"How much more praise can I give on Saturday? If I was a player who was praised on a Saturday, I'd be out the next game saying 'Let's go out and do even better'," Cooper continued.

"I don't see a major reaction from the players, have a bit of pride, shout at each other or something.

"We came here on a lovely night for football, and basic errors which we were on about before the game have cost us."