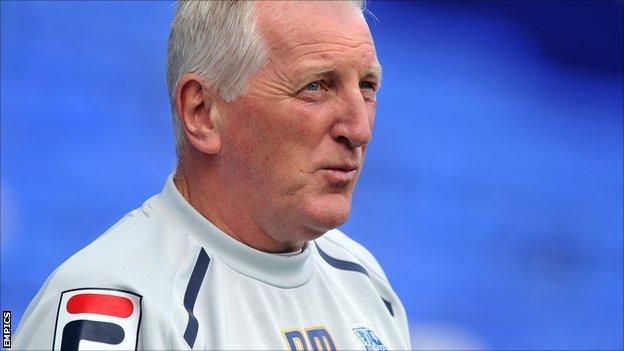 Tranmere Rovers manager Ronnie Moore says there is room for improvement from his team, despite leading the League One table after seven matches.

Rovers remain unbeaten and are two points clear of Stevenage after a 3-0 home win against Bury on Tuesday.

"We've got to improve our passing, we know that, and we will," Rovers boss Moore told BBC Radio Merseyside.

"But at the moment we're keeping clean sheets and scoring goals. We're top of the league so how can I grumble?"

Tranmere are the top scorers in the division with 16, while Andy Robinson [six] and Jake Cassidy [five] lead the individual scoring charts.

Robinson, League One's player of the month in August, netted two penalties in Tuesday's victory at Prenton Park - a result that sent winless Bury to the bottom of the table.

"There are no easy ones because no one will lay down and die," added Moore, who won the manager of the month award.

"It was a hard game but we got the breaks at the right time and, luckily for us, that's what's happening at this present time."