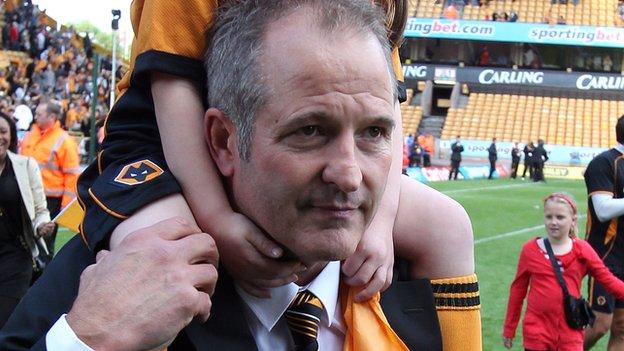 Wolverhampton Wanderers legend Steve Bull says that trying to go straight back up to the Premier League this season should not be a priority over long-term consolidation.

Bull, the Championship club's all-time record goal-scorer, warns of the dangers of chasing too much, too soon under new manager Stale Solbakken.

"Me personally, I hope we don't go up this year," Bull told BBC WM.

"I don't want to risk going up to then go straight back down again," he added.

"I would rather this man [Solbakken] come in and get a team together in the next two or three years that goes up and then stops up there.

"It's going to be a long, hard season and we've had a mixed start.

"We've turned tables from home-grown talent to foreign players and it's going to take time.

"The foreign players have got to find their feet and we're scrambling along a bit. Once they click, the team will click.

"It's a new manager with a new team. And any up and coming talent, the fans here will always come and support.

"But Wolves fans need to stick behind him and judge him by Christmas and see where we are in the table then.

"We've got the firepower, but we need to strengthen our defence to help Carl Ikeme.

"The keeper's been playing out of his skin and has helped his back four out quite a lot. But we've got to stop leaking goals."