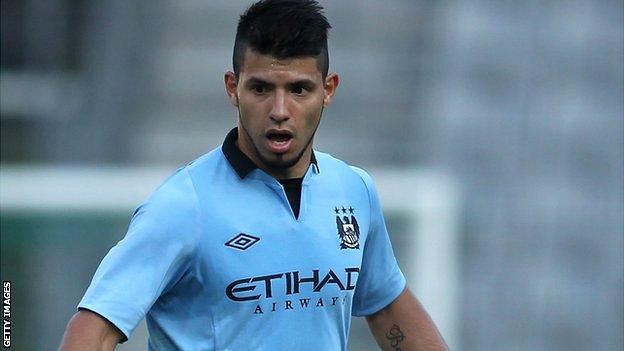 Sergio Aguero says signing for Manchester City was the best decision he could have made.

After Tuesday's Champions League defeat by Real Madrid, Aguero is reported to have said he would have signed for the Spanish club if they wanted him, adding he had "no choice" but to join City.

But he tweeted: "I'm very happy to be at Manchester City. It's the best decision I could have taken."

The striker, 24, joined City from Atletico Madrid in the summer of 2011.

The Argentina international impressed in his first season in English football, scoring 30 goals, including the dramatic late winner against Queens Park Rangers on the final day of the campaign that sealed the title for Manchester City.

Aguero, who is contracted to the club until 2016, was first linked with a move to Real Madrid in May, but quickly dismissed the speculation.

And he has again reiterated his happiness at City, saying he is determined to win more trophies while at Etihad Stadium.

"I feel comfortable and appreciated at Manchester City - it's a project I feel involved in. We want more titles and we'll get them," Aguero added.

The forward has not played for City since the opening game of the season against Southampton, where he picked up a knee injury.

He was an unused substitute against Real Madrid at the Bernabeu, but could return when City host Arsenal on Sunday.