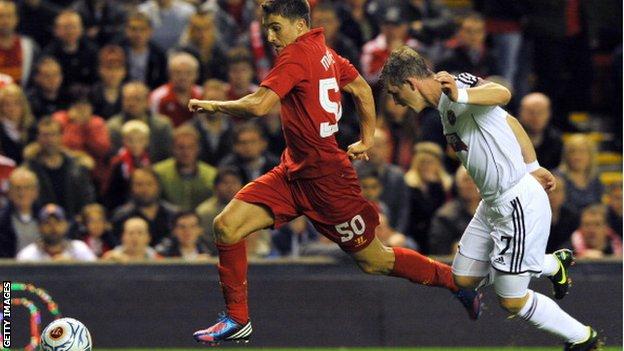 Eight Liverpool first-team regulars have not travelled to Switzerland.

"I don't think Liverpool can afford to turn up without their best players. We can embarrass them," said Rueda.

The squad selected by the Liverpool manager for the opening match of the group stages has an average age of 21 and includes seven teenagers.

"They did not shine in the early season, taking just two points from their first four games - that makes me say that we are not far from them," added Rueda, whose team raced into a 3-0 lead against Tottenham in their Champions League play-off two years ago before the Londoners levelled and went on to win 6-3 on aggregate.

"Liverpool are a global club, a legend, and we are very proud to be allowed to compete in the Europa League against them.

"This is a high point. We are looking forward to the Europa League - this is like a Champions League group."

Rodgers said he was acting in the "best interests" of the football club and admitted the experience of losing 2-0 to Arsenal in the league a few days after playing Hearts in Europe weighed heavily in his thoughts.

"If I lose some of my key players that can make it very difficult for us for the next two or three months," said the 39-year-old.

"There were parts of the game against Arsenal where we were a bit leggy, so we have to make sure we are all firing for Sunday.

"No matter what the perception is, I know in my own mind I've brought a team here which has a mixture of experience and talented young players."