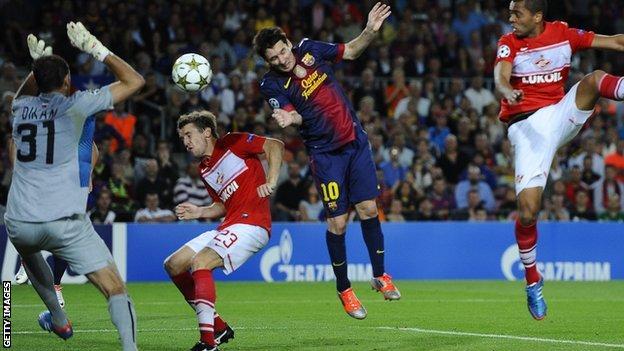 Barcelona were given a scare before overcoming Spartak Moscow, and Bayern Munich also got their Champions League campaign off to a winning start.

There were away wins for BATE Borisov and CFR Cluj as they beat Lille and Braga respectively.

Ukrainian side Shakhtar's 2-0 victory put them top of the group, as holders Chelsea were held to a 2-2 draw by Italian champions Juventus.

Mkhitaryan at the double

Henrikh Mkhitaryan put Shakhtar in front when he drove in a shot just before half-time to break Danish side FC Nordsjaelland's resistance.

The attacking midfielder added a second when his cross rebounded back to him and he sidefooted home for his 14th goal of the season.

Bayern Munich have shown no hangover from losing last year's Champions League final to Chelsea as they won a fifth game on the trot with a 2-1 victory over Valencia.

"To start off with a win is very important. I can't say that I am pleased with the performance but as for the defence it is always possible that you can concede if you are so far up the pitch."

Late in the game, the visitors' centre-back Adil Rami was sent off for a second yellow card after bringing down Arjen Robben, although Mario Mandzukic saw his penalty saved.

But BATE Borisov top the group after putting in an impressive performance to win 3-1 at Lille and secure their first ever win in the Champions League group stages.

Aleksandr Volodko turned and powered in a long-range strike, Vitali Rodionov tapped home after a swift counter-attack and Edgar Olekhnovich fired in to score the goals for the ruthless Belarus outfit.

Lille wasted a number of chances and had only an Aurelien Chedjou header to show for their efforts.

Barcelona once again had Messi to thank as they beat Russian side Spartak Moscow.

The Spaniards took the lead when Cristian Tello cut in on to his right foot and bent in a powerful shot only for a Dani Alves own goal and a cool finish from Romulo leave them trailing.

But Tello turned provider to the cut the ball back for Messi, who scored a late header to save Barcelona's blushes and add a ninth goal in seven games this season.

Celtic and Benfica played out a goalless draw in the group's other game.

Manchester United secured a 1-0 victory over Galatasaray at home, while Rafael Bastos came back to haunt former side Braga as his two goals gave CFR Cluj victory.

Modou Sougou slid a pass through for Bastos to slot in the opener against the Portuguese club.

The forward added a second when he came in from the left wing and past three defenders before driving in a low shot to secure victory for the Romanian side.