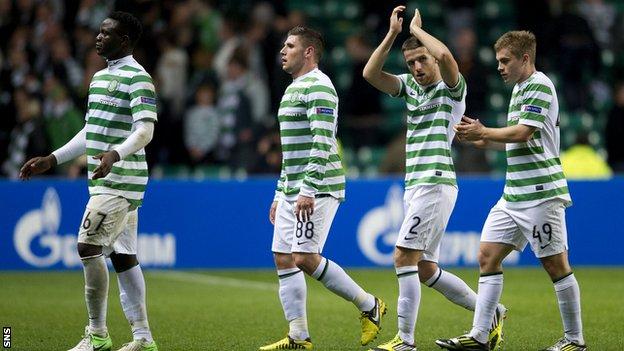 Neil Lennon delivered a glowing post-match appraisal of his Celtic side's performance against Benfica, their first game in the group phase of the competition for more than three years.

He offered the statistic that 10 of his players were making their Champions League debuts as reason to be satisfied with the manner in which they played against a side who have frequented this stage of the competition.

But Lennon's assessment of the goalless draw was a generous one, particularly as Benfica, while decent, will not threaten the latter stages of the tournament.

It is an indictment of how far the Scottish game has fallen in recent years that just about coping with a middle-order European side is seen as grounds for delight.

It may be that Lennon simply wanted to talk up his players after the withering critique of them from the manager in the wake of the defeat by St Johnstone.

Certainly there was none of the malaise, which seemed to affect almost the entire team in Perth, evident on Wednesday.

But the frustration of the supporters in the stands was a more accurate reflection of the performance and the inability to ask a single serious question of Artur in the Benfica goal.

Lennon spoke of the tempo and zest with which Celtic played, but that was only apparent on a handful occasions throughout the match, when it needed to be maintained if Celtic were to have genuine thoughts of winning.

Scott Brown and Kris Commons were the sole contributors in Celtic colours who constantly tried to lift the pace of the game - Brown prowling and snapping into tackles, Commons buzzing in and around the opposition penalty area, looking to create an opening.

This is not to say that Celtic played badly. Rather that there was an ordinariness about them - and Benfica - that failed to build on the tremendous atmosphere created by the fans.

For the home supporters, the return of the Champions League to Celtic Park will, by some stretch, be the highlight of the season.

They, more than anyone, will remember the days of Lennon, Henrik Larsson and company frightening the life out of visiting teams on Champions League nights.

Expectations, as well as financial capabilities, have dipped since then, but surely not to the extent that just being ordinary is worthy of such high praise.

Celtic have players like Joe Ledley, Georgios Samaras and Gary Hooper to come back into the starting XI, but the one key missing ingredient, which might just have made the difference on Wednesday night, was a player who can create match-winning chances in tight matches like that.

They don't come cheaply and perhaps that is why Celtic did not make such a purchase before the transfer window closed.

An interest in Goran Pandev reportedly came to nothing and missing out on him, or a player of his ilk, might in the end prove to be the difference between reaching the knockout phase and slipping into the Europa League, or worse still, going out of Europe altogether.

Lennon, though, remains optimistic of reaching the last 16 and a point or better in Moscow against Spartak in a couple of weeks' time would give him further reason to believe.

147 comments
Back to top
unknown