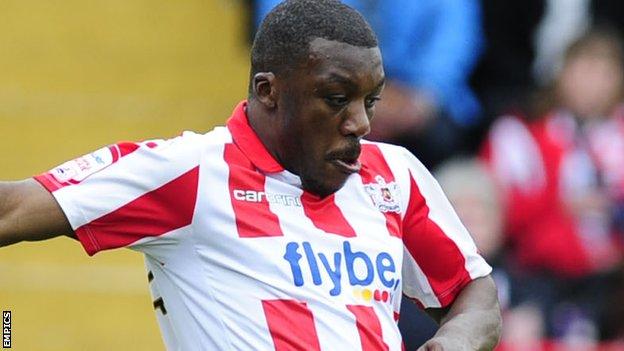 A tribunal has awarded Exeter City an initial £275,000 for Troy Archibald-Henville and James Dunne.

Both players were under 24 when their contracts ran out in the summer meaning Exeter were liable for compensation.

Both players are also the subject of a 20% sell-on clause for any fee that Swindon or Stevenage get in the future for the players.

"When you have good young players that you take form other clubs, albeit we paid for Troy, and you develop them and they go on to earn more money elsewhere then it's only right and proper that under the system we gain from it."

Some of the money is already spent within the playing budget, the board were good enough to put some money into the budget in readiness for this tribunal.

Should they get promoted to the Championship Swindon will also have to pay Exeter £40,000 for the former Tottenham youngster and an additional £100,000 if they are promoted to the Premier League.

Tisdale said that the club had expected to get a certain level of fees from the tribunal and has spent some of the cash already on the squad.

"We've known for a long time that there was a possibility of a compensation fee for these players, even going back a year.

"Some of the money is already spent within the playing budget, the board were good enough to put some money into the budget in readiness for this tribunal.

"We've already attributed that money into the budget already so this money is not going to all come flooding back in."

But Tisdale says that the money that is left will be used to try and keep his current squad, which lies third in League Two, together.

"The biggest thing for me is that when a squad is doing well any money during the course of the year needs to be spent re-investing into the team and keeping those players on hopefully a new contract.

"At some point I'm sure it will give us the advantage of being in that position with regards to contracts for players etc."