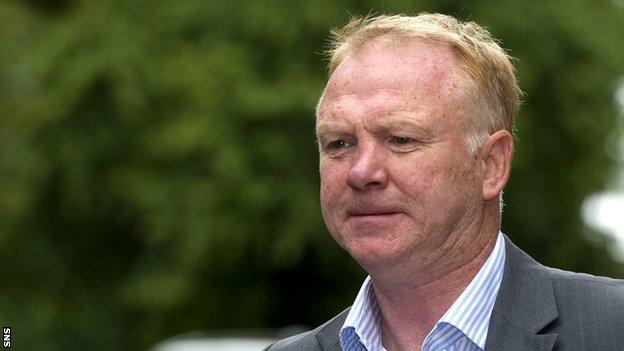 Former Rangers boss Alex McLeish says he would be surprised if the Scottish Premier League's independent commission were to strip the Ibrox club of titles.

McLeish's Rangers won two league championships during the period he was in charge at Ibrox.

"As far as I'm concerned, everything that happened in my tenure was legal," McLeish told BBC Scotland.

"I know when I joined Rangers my lawyer was with me and he said everything was tickety-boo and legal.

"The SPL seem to want to go through this operation of maybe stripping Rangers of titles, which I would find it absolutely gob-smacking if that was the finding.

"Even [former Rangers chairman] Sir David Murray came out a few weeks ago and said that there was nothing done illegally."

McLeish, who was Scotland coach after his time at Rangers, also admitted his surprise that the Steven Fletcher's absence from the national team has rumbled on as long as it has.

The striker, who joined Sunderland this summer and has scored three goals for the Black Cats so far, is not currently being considered by current coach Craig Levein.

Fletcher elected not to feature in a match last year and has since found himself in international exile but recently indicated he wanted more caps while Levein has maintained his stance on the matter.

"I don't want to get in between Craig and the player or criticise Craig or even Steven," said McLeish

"For me, life's too short, you've got to use the best resources you've got because that'll make you a better manager - if you pick good players and those good players respond and win you games," he added.

The return of Darren Fletcher for Manchester United last night could prove to be a "huge boost" to the Scotland manager if he's available for the next World Cup qualifiers against Wales and Belgium next month, feels McLeish.