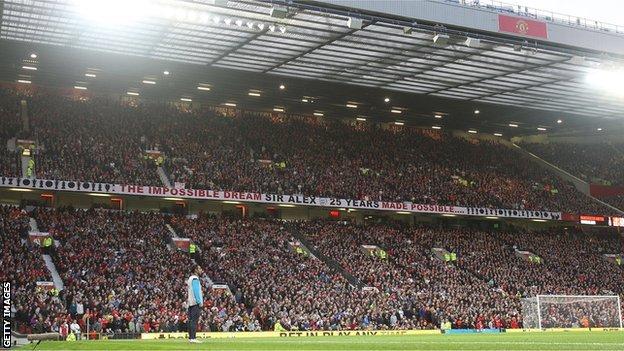 Two prominent Manchester United fans groups have reiterated calls for an end to offensive chants by supporters, with United away to Liverpool on Sunday.

The Manchester United Supporters Trust (Must) and Stretford End Flags group have urged fans not to sing songs referring to the Hillsborough disaster.

Must said: "We unequivocally condemn chants mocking the Munich air crash, Hillsborough and any human tragedy."

The sides meet at Anfield on Sunday in the Premier League, in Liverpool's first home fixture since the findings of an independent panel investigating the Hillsborough disaster were published.

During Saturday's win over Wigan, a minority of United fans sang songs taunting Liverpool fans, leading to condemnation from the Old Trafford club - although supporters' groups insisted the chanting was not related to the Hillsborough disaster.

A statement on website stretfordendflags.com said: "During Sunday's visit, Liverpool FC will be paying respect to the 96 victims of the 1989 Hillsborough tragedy, following the release of new evidence last week.

Eight Manchester United players and three club staff died when their aeroplane crashed while attempting to take off from Munich. The team were on their way home from a European Cup quarter-final against Red Star Belgrade. A total of 23 people died in the accident.

"Stretford End Flags support Sir Alex Ferguson's calls for Manchester United supporters to respect this occasion and to further refrain from indulging in the type of chants that have been highlighted by the media over the last week."

United defender Nemanja Vidic has said he is confident the fans will show respect.

"We have shown many times in the past and I think we will be proud of them," he said.

"The big teams respect each other and we are going to play football."