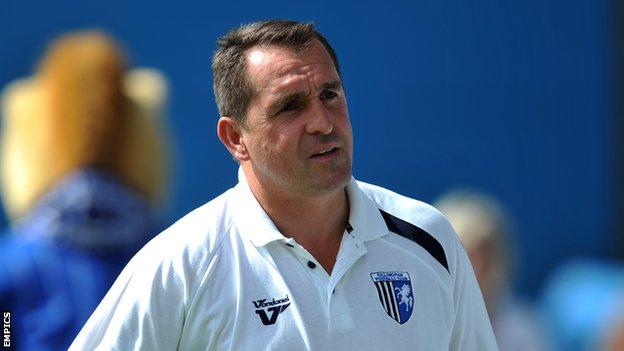 Gillingham manager Martin Allen has said he will not walk away from Priestfield should another club show interest in him.

Allen took charge of the Gills this summer and has led the side to the top of the League Two table.

He told BBC Radio Kent: "I made a promise to the chairman [Paul Scally] and told him that we would do well.

"I've run and gone for the money in the past but this time I will stay and see it through."

Gillingham are Allen's seventh different club since he started his managerial career with Barnet in 2003.

He added: "The chairman said to me, 'What are you going to do when all the speculation starts about moving to higher clubs in the Championship and top of League One, because all those clubs will want you?'"

"I squeezed his hand, went eye to eye with him and said: 'Mr Scally, I will stay here. Unless it's Premier League.'

Gills chairman Scally asked previous manager Andy Hessenthaler to step down at the end of last season after failing to deliver promotion to League One.

Although Allen believes the Kent club have the potential to play at a higher level, he is refusing to get carried away with their start to the season.

"It's not about your history or how big your stadium is.

"It's about how you run your football club, how you recruit players and bring through youth players.

"There's no God-given right or a free pass to play higher. You have to earn that, not get it from your history.

"With the stadium, the training ground, the backroom staff and the players that are coming through there is potential for it [Gillingham] to go higher.

"Definitely for the Championship.

"But let's get this job done first and not get carried away. It's hard work to get out of this division and there's a long, long way to go."