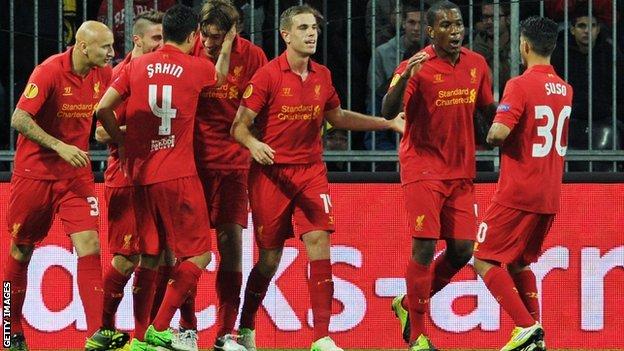 Liverpool boss Brendan Rodgers praised his side's youngsters after they secured a 5-3 win at Young Boys in their opening Europa League group game.

"It was a chance for the young players to seize that opportunity to play and I think they did that," said Rodgers.

"It is a night of great pride for the club and certainly me as a manager."

The average age of Liverpool against Young Boys was 24 - even with the inclusion of 34-year-old Jamie Carragher.

Rodgers was accused of taking a gamble with his team of youngsters and fringe players against the Swiss side as he left eight first-team players on Merseyside, with the club due to play Manchester United on Sunday.

If it was a gamble, it paid off - but not without a scare.

Liverpool went ahead through a Juhani Ojala own goal and, after Raphael Nuzzolo equalised, Wisdom put the Reds back in front.

But some poor defending allowed Ojala and Gonzalo Zarate to put Young Boys ahead before a Sebastian Coates header and two Shelvey strikes gave Liverpool an entertaining victory.

"Of course we could have defended better and there is no question the three goals we gave away were disappointing," said Rodgers.

"But to draw positives from tonight, the young players were so courageous and brave to play and show that confidence, and my senior players were very much together and kept the young guys going.

He added: "To play like we did and get the goals we did was quite fantastic.

"It was a great [Coates] header from a terrific ball in, and Andre Wisdom, in his first game for Liverpool and especially with it being in Europe, scored a wonderful header."

Shelvey came on as a substitute after 66 minutes and the midfielder made a telling contribution.

"He has been outstanding," said Rodgers. "He is still only 20 years of age and is developing and growing all the time and you saw his confidence when he came on.

"The [first] goal we worked it very well and he did what he can do very well, and I think he will be a big player for Liverpool."