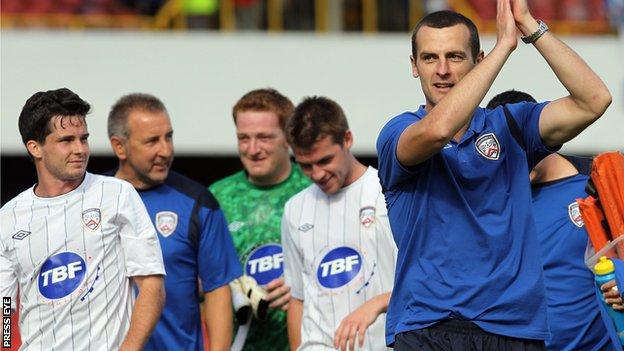 Kearney's men are level on points with Cliftonville at the top as they prepare to host sixth-placed United.

Coleraine have not lost a derby since Kearney's appointment 18 months ago, but he warns: "They are a different proposition now.

"They are well organised and have not conceded many goals this season."

Ballymena's fine start to the season has stuttered a bit in recent matches, with defeat at Cliftonville followed by disappointing home draws against Donegal Celtic and Dungannon Swifts.

Ferguson said Ballymena should have had victory over Dungannon sealed last Saturday before conceding a late equaliser.

"We will have the lads lifted for Saturday," said Ferguson.

"If you cannot get up for a big derby, you shouldn't be in the game."

Elsewhere in the Premiership, Portadown are struggling with injuries as they prepare for an away match against Cliftonville.

Midfielder Neil McCafferty is out for several weeks with a knee injury, though boss Ronnie McFall will be hoping Kevin Braniff and Keith O'Hara will soon be fit to return as the Ports seeks their first win since the opening day of the season.

Third-placed Glentoran, the only unbeaten team, will be fancied to take three points against Lisburn Distillery who are bottom of the table.

Champions Linfield suffered another injury setback when Mark McAllister picked up a hamstring injury in training this week.

Fellow striker Peter Thompson, who has been out with a hamstring problem, trained this week and could feature in Saturday's trip to resurgent Glenavon.

Another injured Blues front man, Matthew Tipton, will make his comeback in a reserve game this Saturday, along with defender Steven Douglas.

Linfield find themselves in the unfamiliar position of eighth and Gary Hamilton's Glenavon will be wary of a backlash by David Jeffrey's men who lost at home to Cliftonville last Saturday.

Crusaders, currently fourth in the Premiership, travel to Stangmore Park where Dungannon Swifts have yet to win a home game this season.

Ballinamallard United, up to fifth after last weekend's 2-0 win at home to Portadown, are away to Donegal Celtic who are still without a league victory this term.