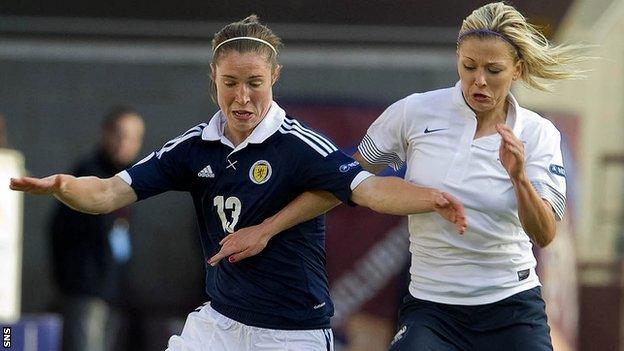 Scotland's women have been drawn against Spain in the play-off round for Euro 2013 and will use Hampden for the home leg on 20 October.

Anna Signeul's side reached this stage by finishing runner-up to France in qualifying Group 4.

The Scots, who are ranked 22 in the world, are aiming to qualifying for a major tournament for the first time.

The other play-off ties are Ukraine v Iceland and Austria v Russia, with the second legs played on 24/25 October.

"This will be a new and very interesting challenge for us," said Signeul. "In all honesty they are the one team in the draw that we know least about.

"We have had them scouted recently and what we do know is that they are a technically gifted side.

"We can expect them to have a lot of ball possession and we will have to be at the top of our game to get the better of them.

"We go into this play-off in a positive frame of mind and will approach it in the same way that we have every one of our qualifying matches so far - determined to win and with belief that we can do so.

"The players are very much looking forward to playing the home leg at Hampden Park. They are immensely proud to have the opportunity to showcase the women's game at the home of Scottish football.

"The finals next July are in Sweden. Nothing would make me more proud than to lead Scotland to a first major championship finals in my home country."

Scotland lost twice to France in qualifying but were unbeaten against Wales, Republic of Ireland and Israel, taking 16 points from their eight matches.

Spain were second behind Germany in their campaign and have made one European finals appearance before, reaching the last four in 1997.