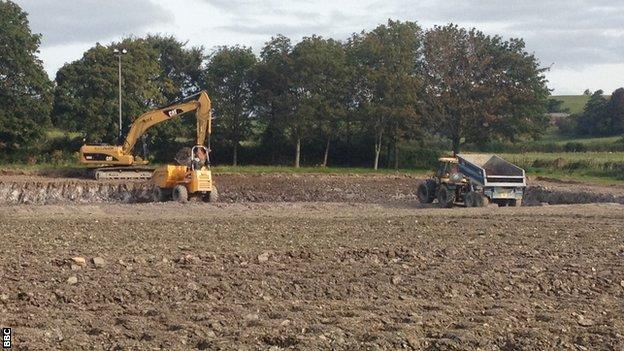 Torquay United manager Martin Ling says redevelopment of the Gulls' training ground will help create a legacy which will sustain the club in the future.

After months of talks, work has finally begun on levelling out the pitches at the club's Seal Hayne training facilities outside Newton Abbot.

The project has been funded by transfer income from the sale of players such as Bobby Olejnik and Eunan O'Kane.

"It's the biggest thing for this club," Ling told BBC Sport.

"We've made quite a bit of money in the transfer market and we're not going to reinvest that totally in the players.

"To invest it in our training ground like Crewe do is the way forward."

Ling says when he has had potential signings visit the club he has deliberately not taken them to Seal Hayne.

"It'd be nice to fetch them out here and show them where we train and develop young players.

"The first day when the digger came here it gave everybody a lift.