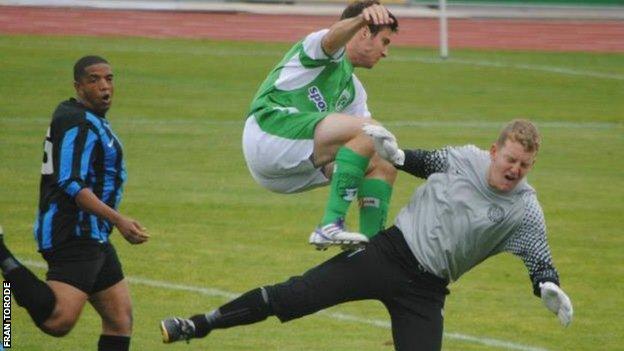 Guernsey FC boss Tony Vance says leading scorer Ross Allen could have scored more than the five goals he got in the 5-3 win over Colliers Wood Utd.

Allen now has 12 goals for his side this season, who are now second in the Combined Counties Premier League.

"He should have had more," Vance told BBC Guernsey. "His finishes were fantastic, his fourth was excellent.

"In the first 20-25 minutes he should have pulled the trigger a bit earlier and he would have got more goals."

Allen got his second six minutes later before Mario Embalo levelled the scores just before half time.

The 25-year-old put Guernsey back in front with 14 minutes to go and added two more in the final minutes before Colliers Wood pulled one back in stoppage time.

Despite scoring five goals Vance was critical of the way his side played against a team who are second from bottom.

"It was a bit of a warning to the fact that any 11 can beat any 11 on their day if we don't perform and are sub-standard," he added.

"They're pretty much around the bottom and we're focusing around the top and we struggled, and it proved that no-one's got a divine right to win a game of football.

"To a certain degree they played well, but we certainly contributed to it because of our inadequacies to defend at times."