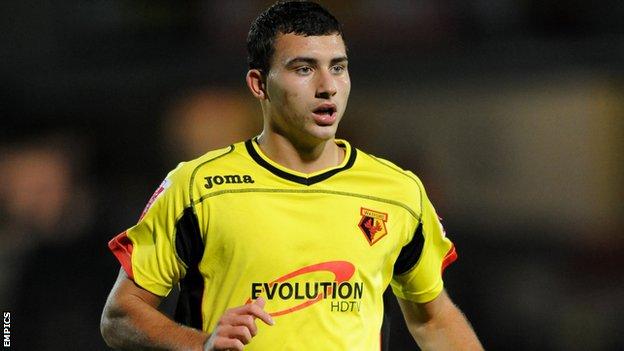 The 21-year-old has joined for a month and is available to Argyle boss Carl Fletcher up to and including the trip to Rotherham on 27 October.

Argyle have injuries to midfielders Paul Wotton and Jamie Lowry and had inexpereinced duo Luke Young and Conor Hourihane on display on Tuesday.

"I'm delighted to have him in, he's only 21 but he has 80 Championship games under his belt," Fletcher said.

"He's a good solid midfielder and with our injuries it'll be good to bolster the area.

"You don't play 80 times in the Championship without being half decent," he added to BBC Radio Devon.

The England Under-20 international made his debut for the Hornets in 2008 and has made 95 appearances for the club in all competitions.

But he has found his chances limited this season under new boss Gianfranco Zola, making his sole appearance of the season in the Captial One Cup loss to Bradford last month.